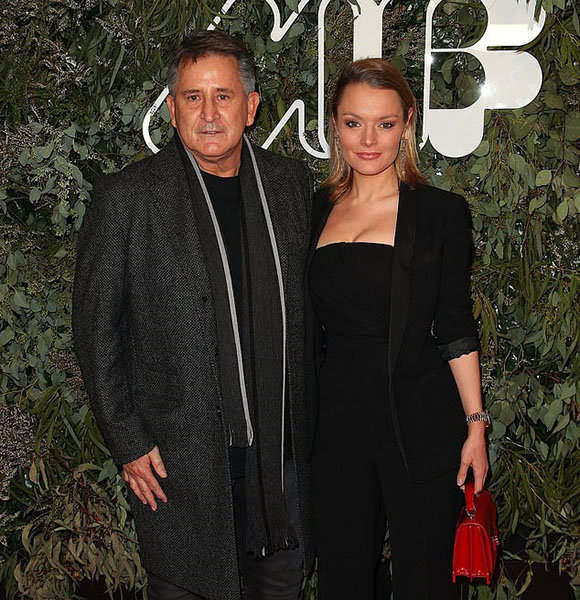 Australian TV actor Anthony LaPaglia is best known for his role as Jack Malone on the CBS drama, Without a Trace (2002-2009). He has been active in the TV industry since 1985 and has his name credited in over 100 works as of 2020.

Even though he primarily acts in TV series, he is also a well-established movie actor. Some of his movies are Happy Feet (2006), Legend of the Guardians: The Owls of Ga’Hoole (2010), and Annabelle: Creation (2017).

Anthony is married to Alexandra Henkel. Anthony and Alexandra went public with their romance in 2015 and announced their engagement in April of 2017.

A year after getting engaged, they tied the knot on 28 April 2018 in Hawaii. The ceremony was held at the Haiku Mill on Maui’s North Shore. The couple, who have a 30 year age difference, then embarked on a European honeymoon after their marriage.

After his split from Cherie, Anthony got into a marital relationship with fellow Australian actress Gia Carides. They exchanged vows on 11 September 1998 and welcomed a daughter, Bridget LaPaglia, in January of 2003.

More On Anthony's Divorce:- Gia Carides And Her Husband Of 17 Years Talk About Their Relationship And How It Went For Divorce

Both Anthony and Gia share joint physical custody of their daughter.

Anthony LaPaglia was born to Gedio LaPaglia and Maria Johannes on 31 January 1959 in Adelaide, South Australia. He has two siblings, brothers Jonathan and Michael LaPaglia.

He began acting in his late teens and completed some acting courses at the South Australian Casting Agency. Anthony then moved to Los Angeles to pursue his acting career.

The Australian actor made his screen debut in 1985 in Steven Spielberg’s Amazing Stories. He went on to play in numerous films and TV series in the next few years, with some of the notable ones being So I Married an Axe Murderer (1993), Emire Records (1995), and Murder One (1996-1997).

World's Most Successful Director:- How Much Is Steven Spielberg Net Worth? Complete Info

His career-defining role came to him in 2002 when he got cast in Without a Trace. The series ran for seven seasons and ended in 2009. He won a Golden Globe in 2004 for Best Performance by an Actor in a Television Series for the show. Since then, he has played in dozens of successful movies and TV shows.

According to celebritynetworth.com, the actor has a net worth of $6 million.