Whats The Life Of The Host Of “The Beat With Ari Melber”: Ari Melber Like? Is He Dating Alexandra Daddario

By LRU Writer | On: July 14, 2021
The chief legal correspondent of MSNBC and the host of “The Beat with Ari Melber” is one charming man. An Emmy award-winning journalist, Ari Melber, with his detailed analytical approach and glorious insights has gradually established his name as one of the leading journalists of the modern era. However, his personal life has been... Post his failed marriage life with the first wife..., he is said to be dating... 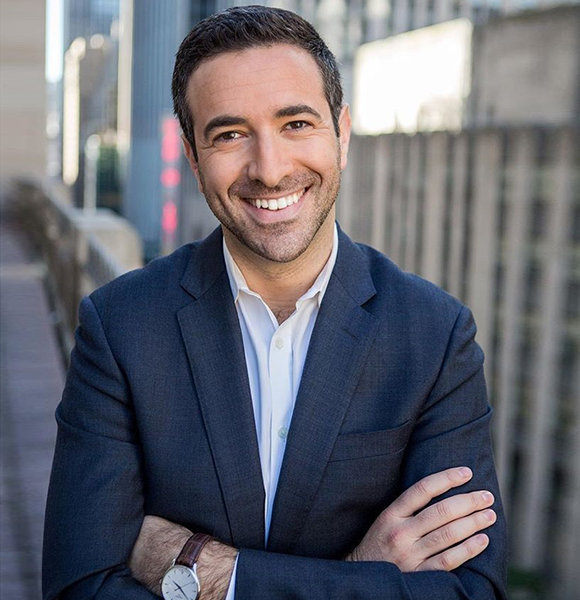 Ari Naftali Melber is an American journalist and attorney who has garnered many fans with this liberal mindset and has always spoken up for important issues. The Emmy award winner is known for his most popular show, “The Beat with Ari Melber.” Started in 2017, to this day, his show has been the most popular and has brought the highest rating on MSNBC.

Outstanding Career And Net Worth

Melber's career has been amazing as it led him to win an Emmy for his supreme court coverage. In addition, Melber's journalism expertise has led him to be one of the most reputable and respected journalists.

His career began in 2008 when he covered the presidential election campaign. He initially started as a lawyer and political writer for magazines like “The Atlantic,” “The Nation,” etc.

With his amazing news coverage skills, he was approached by MSNBC to appear as a guest host, but it was still not an offer that did justice to his talent. After declining the offer, he was approached for a permanent host, and the 41-year-old took the job.

The 41-year-old attorney has only had ups in his career since. He writes columns, news articles and does hosting for many reputed news companies.

His show “The Beat with Ari Melber” is one of the most popular talking shows. The show was nominated for EMMYS under the category of “outstanding live interview.”

As of January 2021, the show was the #1 show averaging 2.6m viewers. The show went on to break records of CNN and FOX news.

Looking back at his career, we can assume his net worth reaches over millions.

What's Life Outside Work? Is He Dating Alexandra Daddario

Despite these amazing achievements in his professional career, his personal life hasn’t always been amazing.

While Ari likes to keep his life private, we can't help ourselves to keep our gaze off of the host's personal life. He was a married man in 2013 when he got married to his wife, Drew Grant. So while some people have questions regarding his sexuality, we can confirm he is not gay.

His marriage with Grant was short-lived. After 4 years of marriage, they divorced in 2017. Well, this charming man is still not a dad. He had no kids from his marriage.

Well, in 2018, after Melber's and Alexandria Daddario's picture started surfacing on the internet and fans started going crazy and started shipping these two.

While to this day, we are waiting for a confirmation, neither of the individuals have confirmed or denied their linkup.

But in 2018, Daily Mail released a photo of these in a car after what seemed like a lunch date in Malibu. Shortly after getting in their car, the two kissed each other. Now, with this evidence in hand, we do not think they needed to confirm their relationship. Even though the two love birds seemed to be enjoying their newly blossomed love, their lovely and quiet relationship did not last.

What Happened Between Alexandra Daddario And Ari Melber?

Everyone thought the two love birds enjoyed their romantic life in private, as not many sightings of these two were seen. But their well-wishers and fans were crushed when they saw Alexandra Daddario taking a walk with Brandon Wallace in Rome.

The two seemed to be pretty close, and by seeing these pictures, we can not seem to deny that these two aren't dating. Alexandra and Brandon walking in Rome in 2019 (Source: DailyMail)

While Daddario and Wallace have kept the status of their relationship private, we can confirm that these two were involved in a romantic relationship and might be going on in 2021 still.

Talking about Melber, he might have enjoyed his dating life in private as we have not heard much of his personal life lately. Instead, he has been focusing on his work and enjoying the amazing numbers his show's been putting up with.

We wish the amazing journalist to have a life filled with love and happiness and see him happy with someone soon enough.

Melber was born Ari Naftali Melber on 31 March 1980 to parents Daniel M. Melber and Barbara D. Melber. He is an American national possessing European Jewish descent. His grandparents are Jewish 'Holocaust' survivors of the Second World War. They somehow managed to immigrate to the States and settle down in Seattle.

He was raised in a middle-class family and attended a Jewish school. He was into law and order from a young age. When he was in grade three, he was part of a play about the judicial system. Then, in high school, he was elected the class president. He even admits it was the starting point of his interest in politics.