Ashley Judd Survives From Near Death Experience, Relationship Status After Divorce With Husband

By LRU Writer | On: August 04, 2021
On February 2021, American actress/ political activist Ashley Judd took to Instagram and shared her near-death experience caused by a sudden fall while visiting a camp on Congo... However, on August 2 she took to Instagram to share her recovery journey and it is simply beautiful. 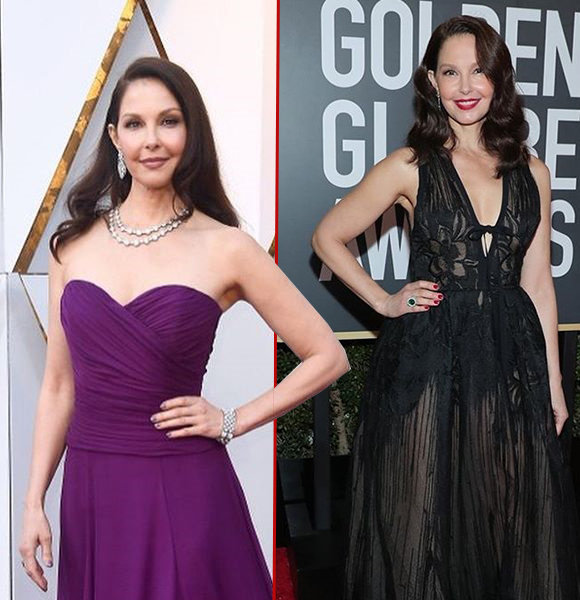 On February 2021, American actress/ political activist Ashley Judd took to Instagram and shared her near-death experience caused by a sudden fall while visiting a camp on Congo.

In February 2021, Ashley had a devastating fall in Africa when she visited the Democratic Republic of the Congo to see endangered bonobos monkey. She tripped over a tree and had life-threatening injuries that included internal bleeding and a shattered leg. Since then, she had been recovering in the U.S.

In Watch What Happened Live, her mother Naomi updated how Ashley is doing after her 55-hour rescue from the forest. She said:

She's very courageous and she's healing. It's really hard to see her like this. She lives next door, so I'm gonna go up and take her stitches out when we're done. I used to be a nurse before I became a singer.

She expressed gratitude to everyone who has helped her on the way to recovery. She thanked her physicians and the Hughton Clinic, Skyline Hospital staff, and not to miss out, her friends and family.

However, on August 2nd came a news that brought smiles to everyone's faces. Judd shared a series of videos of her walking again. And further shared her road to recovery.

Judd was on extensive care and therapy due to her accident. And as the warrior she is, she powered through her struggles and has regained the strength in her legs again.

She shared a video of her hiking on the Swiss National Park and shared how she walked up the hill in an hour and came down easily.

Sharing the exhilarating moment she said,

My leg will never be the same. She is a new leg. And I love her. We are buddies. We have a come a long way and we have a fabulous life ahead.

Judd's journey has been one of a kind. As graceful of a personality she posses, she took time to thank everyone that has been a part of her recovery. Adding to her caption, she wrote,

I have so many people to thank for helping to make my recovery possible. Many I have previously acknowledged, such as Dr Phil Kregor, the trauma orthopedic surgeon. He, in consultation with Dr Susan Mackinnon & Dr Scott Levin, made a very gutsy decision to decompress my deeply damaged peroneal nerve. Her Instagram post brought warmth to many of our hearts and our blessings extend to the 53-year-old. We congratulate her on her achievement and give her best wishes to have a full, healthy recovery.

Who Is Ashley Judd Married To?

The Kiss, the Girl actress, got married to three-time Indianapolis 500 winner Dario Franchitti, who she thought would be her life partner. The duo had been engaged two years before their marriage, in December 2001, in a castle in Scotland.

During their 11-year marriage, Ashley was often present in the pits while her husband raced. Sadly, it seemed like their marriage had run its course as the couple split on a mutual decision on 30th January 2013.

Though the actress and retired racing driver are no longer husband and wife, they are on good terms.

Dario has remarried and is wedded to Eleanor Robb. Ashley, on the other hand, is godmother to Dario’s daughter, Sofia.

Before getting married to her ex-husband, Dario, Ashley had been linked with multiple personalities.

While there were rumors of her having dated David Duchovny and Brady Anderson, her earliest known partner is the country singer-songwriter, Lyle Lovett. They dated from 1991 but didn’t stay together for long and parted ways in 1992.

Following the split, Ashley was rumored to have been in a relationship with multiple celebrities, including Robert De Niro.

She did, however, have Michael English as her partner around 1995. This relation lasted for a short time, and Ashley got into a relationship with Matthew McConaughey in 1996 while working in a movie.

Unfortunately, it didn’t work out this time either, and she had short relations with partners including Josh Charles and Michael Bolton over the following years.

Ashley Tyler Ciminella, aka Ashley Judd, was born on 19th April 1968 in Granada Hills, California. Her parents are Michael Ciminella and actress Naomi Judd. She was raised solely by her actress mom after her divorce. Ashley also has a half elder sister named Wynonna Judd, who is a fairly successful country singer.