By LRU Writer | On: August 01, 2019
Ashlyn Harris is a professional…started playing at the age of…has had a very successful career…led the USA to win 2002…scored against Canada to lead the US through the…met girlfriend at...partner is also... 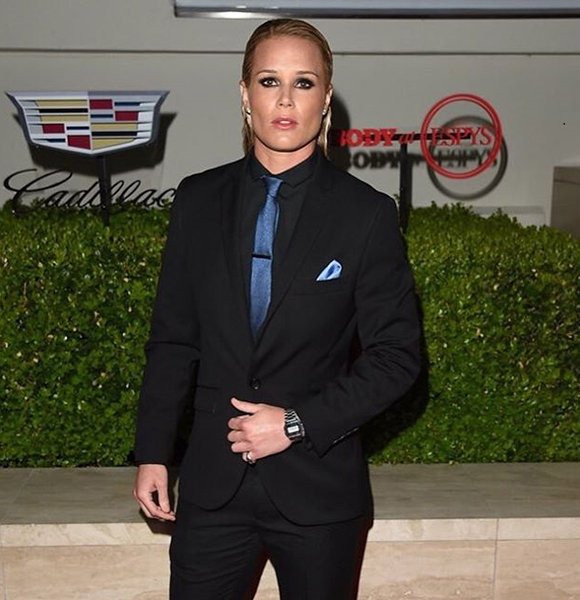 At the age of 33, Ashlyn Harris has managed to cement her name among the legends in Woman's soccer. Her single goal in overtime against Canada in 2002 Under-19 World Cup finals led her team to lift the trophy.

Furthermore, her A-game contribution in the 2019 World Cup also led the US Women's National Team to win the world cup for the second time.

Ashlyn Harris was born on the 19th of October 1985. She spent her childhood alongside her brother Chris Harris in Florida with her parents Mike Harris and Tammye Harris.

Ashlyn made a name for herself in soccer as well as excelled in academics. She attended the Satellite High School in Satellite Beach, Florida. Later, she left her family home behind to attend college.

Well, she moved to Chapel Hill, Carolina to join the University of North Carolina.

Regarding her physical appearance, the soccer star flaunts a short blonde hair that goes perfectly with her slim athletic figure. As for the exact measurements, Ashlyn possesses a tall height of 5 feet 9 inches (1.75 m) and a weight of 66 kgs.

Named one of the most beautiful soccer players, hundreds of thousands of fan gush over the beautiful Ashlyn. However, the soccer player plays for the other side. Yes, thats right. Ashlyn is a lesbian.

The World Cup champ is in a relationship with her fellow soccer player, Ali Krieger. They met back in 2010 at a soccer field. While playing together for the Washington Spirit, Ashlyn and Ali spent a lot of time together and fell in love. Ashlyn Harris (right) with her fiancee, Ali Krieger after their engagement in 2019 (Photo: Ashlyn Harris' Instagram)

Initially, the couple remained mum regarding their relationship. However, Ashlyn and Ali announced their engagement in March 2019.

As of now, with their immense love, mutual understanding, and supportive roles, Ashlyn has chosen to make Ali her wife soon. The life partners have been planning to share their wedding vows in December 2019 in Florida. They also plan on having kids in the future.

Ashlyn played soccer since she was 14 years old. When in high school, she played under coach Fitzgerald Haig and led her team to win the state championship titles in 2002 and 2003.

As for the club level, Ashlyn began her career back in 2009 Pali Blues. The very next year, the star switched to two clubs; first with Saint Louis Athletica and then to Washington Freedom.

With almost a decade of a very successful soccer career, by now, Ashlyn surely has accumulated significant net worth. However, the exact figure of her salary is yet to be public.

Nevertheless, after winning the 2019 World Cup, the US team took home $4 Million and it would not be wrong to assume Ashlyn took a sizable piece of the pie.