By LRU Writer | On: November 16, 2019
Ashy Bines... a well-known fitness enthusiast...gained fame for creating a 12 weeks routine...happily married woman...dated for...is also blessed with a beautiful baby...did not have an easy life...never knew her real father... follows a rigorous diet and intense workout...created a business empire...has also been caught up in many controversies... 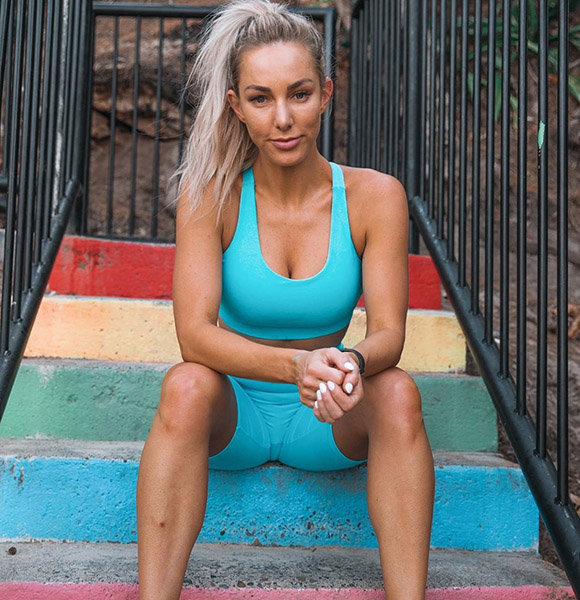 Australian model Ashy Bines, who is popularly known as the face of the Ashy Bines Bikini Body Challenge, is a well-known fitness enthusiast.

She gained fame for creating a 12 weeks routine to achieve a bikini-ready body. As of now, her routine is held as a challenge across Australia, New Zealand, and the USA. Apart from that, Ashy is also famous for her reality show called Raw, which she launched on her Youtube channel in 2016.

Ashy Bines is a happily married woman. She tied the knot to Steve Evans on 22nd June 2014. The couple dated for five years before finally walking down the aisle. Their wedding was a dreamy affair.

As of now, the couple has completed five years of marital bliss and is going pretty strong. On the occasion of Steve's 40th birthday on 1st October, Ashy posted sweetest pictures of the couple captioned,

My man is 40! And I couldn’t be happier to be spending this next chapter of his life with him! I got to spend his whole 30s with him and here’s to another decade ! I love you yesterday, today but not as much as tomorrow.

Well, from those beautiful words, Ashy, and her husband do seem like quite a couple goal. Further, the lovely couple is also blessed with a beautiful baby boy named Taj.

When Ashy was pregnant with Taj, being a true fitness guru, she documented her whole pregnancy actively in her social media; it was almost all her followers saw Taj growing inside her.

Ashy, whose real name is  Ashleigh Jane Kristian Bines, did not have a comfortable life.

She never knew her birth father because he didn't want to be a father and left her mother before she was born.

You May Like:- Brett Azar Bio, Wife, Married, Family

Later, she was mistreated by her stepfather, too. In fact, Ashy's stepfather kicked her out of the house as soon as she turned sixteen.

For many years, Ashy's mother tolerated the abuse from her husband, but eventually, she did leave him. According to Ashy, she is grateful to her stepdad for showing her what she never wanted in her husband.

Born on 2nd and December 1988, the fitness guru stands at the height of 5 feet 8 inches (1. 73 m), with a gorgeous body. Needless to say, she follows a rigorous diet and intense workout routine to maintain her figure.

With her diet and workout routines alone, the fitness enthusiast has created a business empire for herself. Her company, Ashy Bines group, offers fitness and lifestyle programs to its clients. Ashy is also pretty famous on Youtube from her self titular channel in which she continually posts recipes and workouts videos.

Well, Ashy has come a long way since she started as a personal trainer in 2010. As of now, she has established herself as a successful entrepreneur and amassed significant wealth as her net worth.

With rising fame, Ashy has also been caught up in many controversies along the way. Her Clean Eating Guidelines have been criticized as risky by many dietitians over the years.

Most recently, she received quite a heat when she created a workout program designed for small kids as young as one-year-olds.