By LRU Writer | On: November 07, 2019
American actress Auli'i Cravalho lived her dream...in Disney's animated feature film...one low-key celebrity...pretty young to be in a serious relationship...stands at a height of... she won numerous awards...projects lined up...appeared in movies like...mixed ethnicity...grew up in a smalll Hawaiian town... with her mother... 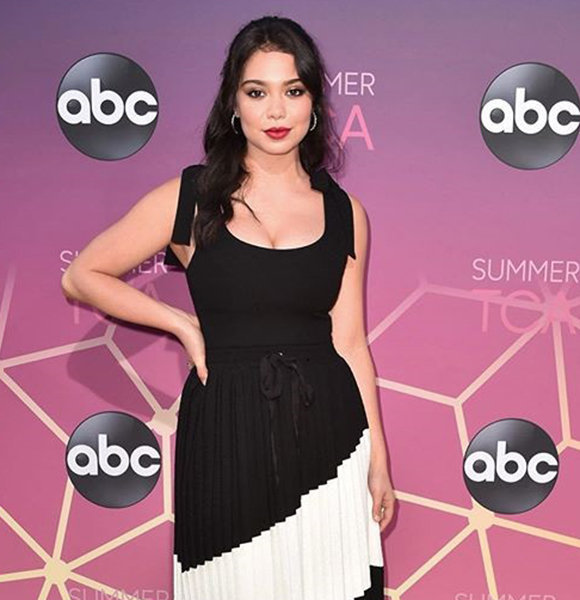 Every little girl dreams to see herself as a princess at a point in her life!

Well, American actress Auli'i Cravalho lived that dream when she got cast to voice the titular character in the 2016 Disney's animated feature film, Moana.

What's more interesting is she almost didn't submit for the role as the majority of girls at her high school were involved, and the volume was too high. Eventually, she did submit and ironically was the last one to audition for the role.

Who Is Auli'i Cravalho Dating?

Auli'i is one low-key celebrity when it comes to her personal life.

Despite her meteoric rise to stardom, the actress has remained very tight-lipped about her private life.

She has never even been linked to anyone. Further, there is not a single information about her past boyfriends or dating affair.

However, the 18-year-old actress is still pretty young to be in a serious relationship. So, she is probably single and entirely focused on her rising career.

She is the lucky girl who got to portray an iconic role for Disney alongside one of the most celebrated actors of our time - Dwayne Johnson, a.k.a. The Rock. For her voice-acting as Moana, she won numerous awards like Alliance of Women Film Journalists award in the Best Animated Female category, an Annie Award in the Outstanding Achievement for Voice Acting in an Animated Feature Production category and a Teen Choice Award.

After totally nailing her big break, Auli'i had projects lined up for her. She has already appeared in movies like Ralph Breaks the Internet, and Spring Awakening. Further, she also has many new projects under production.

Although the exact amount of Auli'i net worth is yet to surface, it won't be wrong to assume that she has already made a fortune for herself. Further, her net worth is more likely to rise soon since she is just getting started.

Born on 22 November 2000, Auli'i has her mixed ethnicity to thank for her incredible beauty. The young actress of American nationality has a blend of Chinese, Native Hawaiian, Irish, Portuguese, and Puerto Rican origins. Well, it was her mixed origins that attracted the casting directors at the auditions for Moana.

As for her family, she grew up in a smalll Hawaiian town named Mililani with her mother, Puanani Cravalho. Auli'i is a very loving daughter to her mother.

Further, she gives a huge credit for her success to her mother and never shies away from showing her love to the lady behind her success.