By LRU Writer | On: September 01, 2019
Awkwafina broke out as an actor via her portrayal of Peik Lin Goh aka the lead’s best friend in Crazy Rich Asians. Her scene-stealing...Awkwafina is a private person when it comes to her personal life. However, she did mention a long-time boyfriend...However, Awkwafina’s childhood was filled with tragedy as her mother... 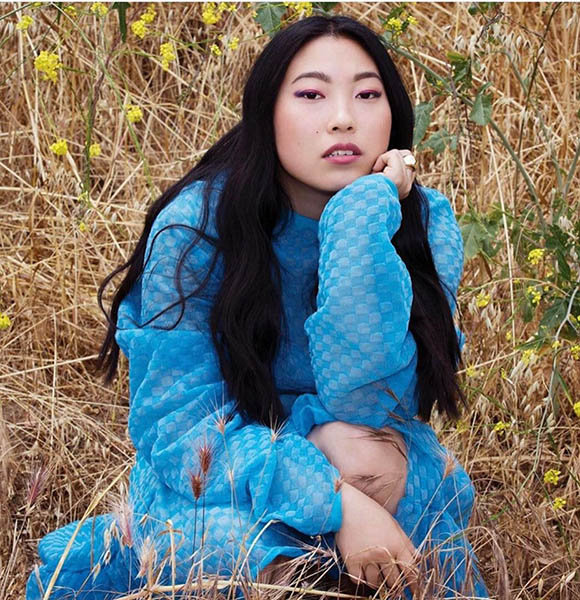 Awkwafina broke out as an actor via her portrayal of Peik Lin Goh aka the lead’s best friend in Crazy Rich Asians. Her scene-stealing performance on the 2018’s biggest rom-com film, made the actress an overnight star.

Following the success, she got cast in major Hollywood films, namely Ocean's Eight, The Angry Birds Movie 2, and Jumanji: The Next Level. Also, she is set to portray the role of Scuttle in Disney’s live-action remake of The Little Mermaid.

As of 2019, her self-titled TV series is in production.

Awkwafina is a private person when it comes to her personal life. However, she did mention a long-time boyfriend during the press-junket of Ocean's Eight in 2018. But, the actress didn’t reveal any information about her boyfriend.

Amidst speculations about her personal life, Awkwafina tweeted about dating being difficult in 2019. The cryptic tweet suggested that she was possibly single.

As the information on her dating life is minimum, rumors about her gay sexuality is also a topic of discussion among her fans. Maybe the conjectures brew from her excellent portrayal of a supposed lesbian character in the movie, Crazy Rich Asians.

Unless Awkwafina opens up about her dating life, speculation about her sexuality will likely come up frequently.

The Asian-American actress hopped a lot of jobs - a video rental store, a publishing company.and an air-conditioning company - before landing Holywood gigs. Interestingly, she went viral as a rapper in 2012 and released an album called Yellow Ranger in 2014. Awkwafina in a still from the 2018 movie, Crazy Rich Asians (Photo: gaystarnews.com)

However, it was her acting, which brought fame and fortune to the talented star. Her reach became evident when she became a female Asian-American artist to host SNL after 18 long years since Lucy Liu - her inspiration.

But, Awkwafina is still not sure of a secure future in Hollywood. In 2018, she continued to live in her cheap Brooklyn, New York apartment. The reason behind her frugality was to save rent money and pay off her student loans.

Given her rise in Hollywood, she may not worry about her loans for long.

The actress of age 31 was born on 2nd June 1988 in New York City. Born to a Chinese-American dad and South Korean immigrant mother, she boasts a mixed ethnicity.

However, Awkwafina’s childhood was filled with tragedy as her mother passed away from pulmonary hypertension when the actress was just four years. Following the death of her matriarch, the Dude star was brought up by her grandmother.

It was her grandma who encouraged Awkwafina to pursue arts from an early age. Interestingly, her father was kept in the dark about the actress’s art classes.

Today, he has come around after the actress’ international success.