By LRU Writer | On: March 29, 2019
It’s a cute little girl! The Shadowhunters star Harry Shum Jr., age..,  and his wife Shelby Rabara welcomed a daughter on ... The first time father shared about his joyous day on Instagram revealing the little munchkin's name to be... The latest addition to the family is the result of  12 years of togetherness between the Glee star and his wife... 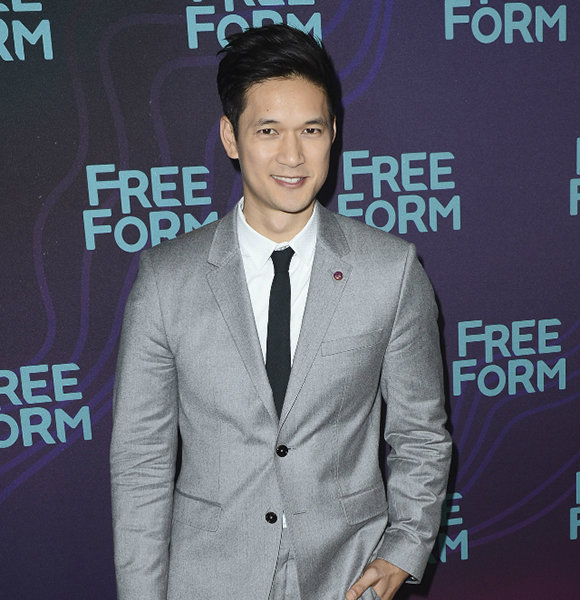 It’s a cute little girl for an adorable couple!

The Shadowhunters star Harry Shum Jr., age 36,  and his wife Shelby Rabara welcomed a daughter on 29th March 2019. The first time father shared about his joyous day on Instagram revealing the little munchkin's name to be Xia. A unique name in the USA, it is an ode to his Chinese ethnicity as Xia is a province’s name in his father home country, China.

The latest addition to the family is the result of 12 years of togetherness between the Glee star and his wife.

On His  Romance With Girlfriend Turned Wife

Harry was a struggling actor when he met his dancer-actress wife, Shelby. Back in 2007, he was just another acting aspirant in Los Angeles. The Crazy Rich Asians actor had dropped out of his college and was rebelling against his parents to pursue his dream.

After the love birds started dating, there was no looking back. Shelby supported her man through everything. His lady luck worked like a charm for the talented actor as he landed his breakthrough role as Mike Chang in musical drama Glee.

Well, the show became a massive hit cementing his status as a popular and talented actor. Like a supporting girlfriend, Shelby was beside him through the struggles and the success.

Realizing her importance in his life, the Step Up 2 actor married his beautiful girlfriend on 22nd November 2015. The ceremony was more special as it took place in the actor’s home country, Costa Rica.

November seems to be the month for all the milestones in Harry’s life. Three years after he got married in the magical month, the actor, height 5 feet 11 inches (1.8 m), announced the pregnancy news of his wife on 11th November 2018. Now a role model to a baby girl, the actor-dancer will sure leave no stone unturned to give her the best life.

On His Movies And TV Shows Role

Harry got his break in acting via a minor role in series Boston Public in 2003. After the start, his big break in the movies came with You Got Served, again playing a small part. Before his breakthrough in Glee where he was part of total 76 episodes, he continued working in movies Step Up 2: The Streets, Center Stage: Turn it Up, and Flirting with Disaster.

The actor of Chinese ethnicity was also part of the all Asian Cast drama Crazy Rich Asians in 2018. Well, keeping the momentum going, he managed to land a role in an ABC drama Heart of Life’s pilot in 2019.

Courtesy of his acting jobs, he has managed to accumulate $14 million in net worth.

Harry was born to a Chinese father and Hong Kong-born mother in Costa Rica. The multi-cultural family moved to the United States when little Harry was six years old. Being the youngest among three siblings, he was one pampered child. Besides his parents, his older sisters Susana Shum and Cristina Shum used to pile him with love.

Although Shum family was against his decision to pursue acting, they came around eventually and basked in their son’s success.