Becky Quick Has No Plans of Divorce Yet As She Lives in Married Bliss With Husband Matt Quayle!

By LRU Writer | On: October 30, 2018
Rebecca (Becky) Quick, an American television journalist owns both beauty and intelligence. Popular as a co-anchorwoman of CNBC's financial news shows Squawk Box and On The Money, Rebecca has placed herself in the summit of success but hasn’t allowed her hectic schedule affect her personal life. it is lesser-known that her marital relation is as successful as her career. 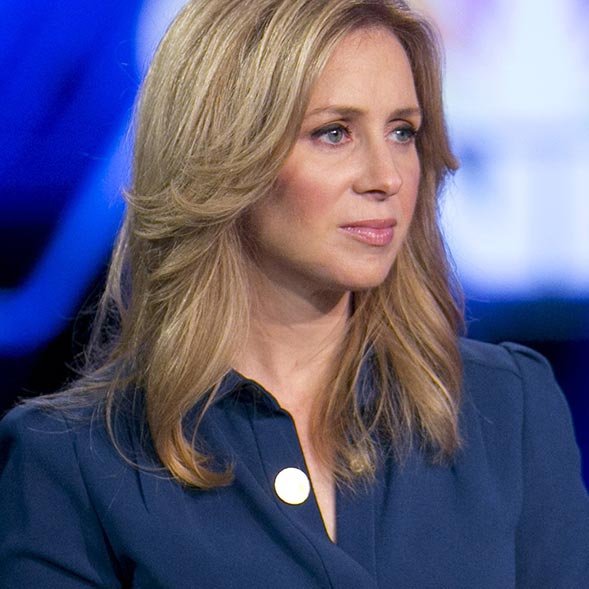 There are not so more television personalities who are able to manage their time to both of their family and profession. An American television journalist Rebecca (Becky) Quick falls in the list of those personalities. Popular as a co-anchorwoman of CNBC's financial news shows, Squawk Box and On The Money, Rebecca has placed herself in the summit of success but hasn’t allowed her hectic schedule affect her personal life.

However, it is lesser known that her marital relation is as successful as her career.

Becky's ability to enrapture people with her outstanding communicating skills is something very amazing but her relationship with her husband Matthew (Matt) Quayle is much more delightful.

You May Also Like: Charlie Gasparino; Married Man With Wife! A Look Inside His Life

Her marital status has made quite some news. She has been married twice. Her first marriage was not so fortunate. Rebecca then got married to Matthew Quayle. Her husband Matthew is a Senior Executive Producer of "Squawk Box" and "Squawk on the Street". Meanwhile, there were many rumors about Rebecca and Matt’s affair. She was said to be in an affair with Matt when she was still bound in marital relationship with her first husband. Her first husband has been a mystery but did she divorce him to get hitched with Matt?

However, Rebecca is now happily married to her husband Matthew Quayle. She got married to him in 2008 and has been together for around eight years. Nevertheless, it hasn't always been a smooth ride in the park. Becky had to face numerous criticisms for marrying her producer.

An insider told the New York Post's Page Six in 2009 regarding the preferential treatment she receives in the show after her marriage.

"He is her direct superior, so it’s a little weird. She’s definitely been getting preferential treatment since they got together.”

However, CNBC soon cleared the ai regarding Rebecca not getting any such treatment after issuing a statement joking how all the anchors married the show's producers.

All three anchors on ‘Squawk Box’ – Becky Quick, Joe Kernen and Carl Quintanilla – have married CNBC producers. Love is in the air when you’re first in business worldwide.

The couple soon got their wedding gift with the birth of their son Kyle Nathanial in August 2011 weighing 6 lbs, 15 oz at birth. Her co-host of the time Joe Kernen made the announcement live on the show regarding the birth of Rebecca's son.

"Breaking news. Do we have a drum roll? Bouncing baby boy, blond hair. Kyle Nathaniel Quayle and for short, Kye as in pie."

The couple has since then added one more member in their family following the birth of their daughter Kaylie Quayle on 10 October 2016.

Becky and Matt have thus been living cheerfully together with their two children, and a further two from Matt's previous relationships. They have been able to set an example of a happily married couple. The love between them is not hidden. They have been expressing their feelings through different social networking sites. Both of them are very active on Twitter. A marriage is a commitment throughout life, a decision to do, where you express your feelings to your loved ones and the two different people bring out the excellence in each other.

Don't Miss: CNBC's Julia Boorstin Wiki: A Bio Ranging From Age to Her Lessons with a Baby

It seems that the marriage has brought great happiness to the happy couple, Becky and Matt. They have explored the similarities and have been enjoying the difference. Most importantly, they are enjoying their life together. Becky Quick has no plans of divorce yet as she lives in married bliss with husband Matt Quayle.

Becky, 46, is a graduate of Rutgers University and has earned a BA in Political Science. Talented Becky has covered retail and e-commerce industry topics for The Wall Street Journal prior to joining CNBC.

Throughout her career, she has hosted panels at some of the most prestigious conferences in the world and also has forthright interviews of some of the world's richest and most significant investors like Bill Gates, T. Boone Pickens, Warren Buffett, Alan Greenspan, and many others.

Becky also has interviewed three U.S. presidents. Her net worth is estimated at around $4 million.

newscaster CNBC Squawk Box and On the Money