Is Ben Aldridge From 'Our Girl' Married? Relationship Status On & Off Camera

By LRU Writer | On: September 30, 2019
British actor Ben Aldridge may have a lot of noted movies including Toast, First Light etc but he brought major of his fame home as the lead cast in the TV series... However, the series reportedly gave him a girlfriend too as he grew close to one of his co-worker during the shooting of the show which led to rumors of him being intimate with... But, the real truth might be a different story or the rumors stand true... 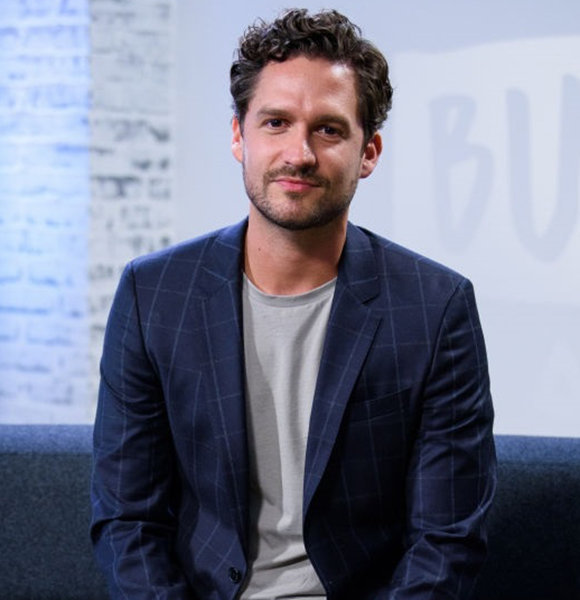 British actor Ben Aldridge may have a lot of noted movies including Toast, First Light, etc but he brought major of his fame home as the lead cast in the TV series, Our Girl.

However, the series reportedly gave him a girlfriend too as he grew close to one of his co-worker during the shooting of the show which led to rumors of him being intimate with the actress.

But, the real truth might be a different story or the rumors stand true indeed?

Don't Miss:- Ben Savage Made the Headlines with his Rumored Dating with Onscreen Girlfriend turned Wife, But were they really Dating?

On-screen married man, Ben was spotted hugging and joking around with Michelle on the set of the series, located in South Africa.

While the pair was reportedly getting comfortable with each other, the rumors reached to the ears of Michelle's husband. Reports surfaced that Mark Wright, Michelle's husband of two years, felt left out after Michelle partied with Ben and other cast members to which he was not invited.

However, a source mentioned that there was no jealousy in Mark, and he was comfortable with his wife hanging out with her friends. The source talked to the Closer on the matter,

"Of course he's very trusting of Michelle and knows her friendships are all innocent, but he says he can't help feeling left out."

And, it was revealed that Ben and Michelle's relationship was solely based on friendship with no other emotions attached to the side. Further, the 33-year-old also defended Michelle when she was accused of looking too flawless on a war drama. In defense, Ben mentioned that she didn't even wear makeup on the sets.

Likewise, Ben reignited the dating rumors when he posted a picture together with Michelle on Instagram in August 2018 and mentioned her as "My Girl" in the caption. As absurd as it sounds, the photo did not cause much trouble, and the two continued being good friends. But, Ben and Michelle took their onscreen affair to a new level when they shot an intimate scene for the final episode of the fourth season of Our Girl. As Ben's character, Charlie visits a wounded Georgie (played by Michelle), the pair confessed their long-suppressed feeling for each other.

You May Also Like:- Joe LoCicero Engaged To Get Married! At Age 31, Stuck With Girlfriend

Viewers appreciated the much-anticipated sex scene, and even critics praised the chemistry shared by the onscreen couple. Further, all the primary cast members were also killed off in the season finale and the new casts for the upcoming season do not include Ben.

In the meanwhile, Michelle is still married to Mark, and the couple has no dispute over their marriage. But unlike Michelle, Ben seems absent in dating life as he has not been romantically linked with anyone.

Reportedly single, Ben has kept his relationship hidden under wraps. Furthermore, he has no known history of a wife or even a committed girlfriend, which has raised curiosity among fans whether the actor is secretly hiding his sexuality.

Although the actor has never talked about being gay, some believe that an absent dating life means he is a homosexual. However, the theory is under review and hasn't been proven to this day.

Further, many believe that as gay men are considered equals to straight people in modern society; he would have come out a long time ago if he was a queer. Ben's love life might not be as prosperous as his career; still, he has people in his life whom he loves and adores.

Soft Spot For Family; Love For Goddaughter To Siblings

As for his family, Ben is close to them and has a sweet spot in his heart for them. On 27 May 2016, he shared a picture along with mom clicked while the duo enjoyed their free time together. Ben spends time with his mother on 27 May 2016 (Photo: Ben Aldridge's Instagram)

The Lark Rise to Candleford actor is also a proud godfather to his goddaughter and even featured her picture in one of his posts shared on 16 November 2016. Ben poses with his siblings and their children on 9 October 2017 (Photo: Ben Aldridge's Instagram)

Ben is still a lovable brother, and he cherishes his memories of growing up with his brothers and sisters. On 12 April 2018, he shared a throwback picture of his childhood along with his siblings and cousins and expressed his undying love for them.

Ben, who is an animal lover, has been recently appointed as the ambassador for the Send A Cow To Uganda With Love campaign which focusses on the well being of Ugandan farmers and general citizens. He even posted a tweet on 19 June 2018 urging fans to support and donate for the noble cause.

Though Ben Aldridge does not have the luxury of dating a girlfriend, he is very successful in his career.

He surprised everyone when he exited from the fourth season of Our Girl. But, he made his decision count with a career defying role in the prequel of Batman named Pennyworth which aired its first episode in July 2019.

The actors boast the central role of Thomas Wayne - father of Bruce Wayne aka Batman -  and the story shows a Gotham before Batman. Likewise, he also fights for noble causes and is the ambassador of SAC (Send a Cow) which works for the betterment of people in Africa.