By LRU Writer | On: July 16, 2019
Ben Simmons is one of the most promising youngsters emerging in the scenes of...the star point guard was the biggest commitment by a team expected to make a serious push at its first NBA... joined Montverde Academy in Florida, US, on January 2013 and helped his side win...withdrew from the university to announce his name for... 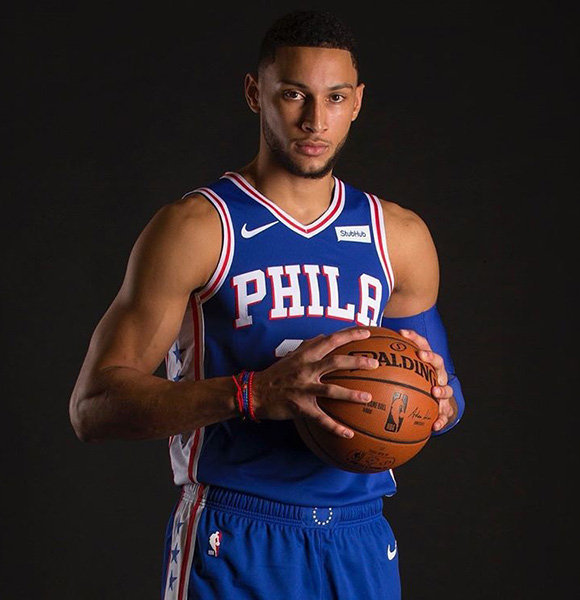 Ben Simmons is one of the most promising youngsters emerging in the scenes of the NBA. Following a tremendously successful 2018-2019 outing, the point guard signed a five-year-long contract with the Philadelphia 76ers in July 2019.

The $170 million deal is the most expensive commitment made by a team with a newcomer since 1983. The contract has made Ben the wealthiest Australian athlete.

Ben Simmons was born on 10 July 1996 in Melbourne, Australia to parents: David Simmons and Julie Simmons. His father was born in America and later married his mother Julie - a single mother of four children.

Ben was the youngest in the family with five elder siblings; Mellissa, Emily, Liam, Sean, and Olivia. He grew up along with his father in Newcastle, who coached basketball for a local team.

Following the footstep of his father, young Ben and his older brother Liam started playing basketball. While Liam enjoyed an earlier success in basketball, his playing days were over in a short period, and he moved into coaching.

Ben took lessons from his elder brother, which improved his shooting skills drastically and also helped in his career.

Ben Simmons has turned head over heels with his attacking gameplay and tremendous match skills inside the basketball court. However, it was his dating rumors with girlfriend Kendall Jenner that grabbed most of the headlines in 2018.

The 76ers forward was in a relationship with model Kendall in 2018. But, the young couple took some time off of each other at the start of 2019. It was a happy time for Ben's sister Olivia as she was against the relationship and had even mentioned multiple times about her disagreement with the couple's relationship.

Various outlets reported on the couple's split, but the NBA star later revealed that it was only a break amid their hectic schedules.

In May 2019, when Kendall was asked about her relationship with Ben, the model revealed that they were very close to pronouncing their wedding vows as husband and wife.

Ben started playing basketball at the mere age of seven and also participated in the under-12 team for Newcastle Hunters. But he also enjoyed playing football. Later, in a tie between basketball and football, Ben decided to go with the former as his coach did not allow him to play in the forward position in football. He then received a scholarship at Australian Institute of Sport in 2012 and was invited to the Pangos All-American Camp in the US, for improving his basketball prospects.

Ben eventually joined Montverde Academy in January 2013 and helped his side win 71-62 over Oak Hill Academy. After the victory, he was named the MVP as well as America’s Top High School Junior by the National Basketball Players Association.

He later joined Louisiana State University (LSU) in November 2014 to play in college competitions. However, in the post-season 2016 SEC Tournament, the LSU team’s performance was disappointing, and LSU Tigers did not enter NCAA Tournament.

Ben then withdrew from the university and listed his name in the 2016 NBA Draft. Much to his surprise, he was selected by Philadelphia 76ers with the first overall pick in the draft.

The young star continued his tremendous run in the NBA summer camp. Unfortunately, he missed the whole season due to an ankle injury.

Despite his injury, Ben came back more determined to prove himself and made his debut in 2017 NBA season. He immediately made a significant impact winning NBA Rookie of the Year and being selected in NBA All-Rookie First Team.