By LRU Writer | On: June 16, 2019
While fans have seen kick asses in the ring, many are not aware of the softer side of legendary wrestler Bill Goldberg...A devoted family man, Goldberg even returned from retirement to fulfill a wish made by his son...Awarded with many honors & titles during his career, the former WWE superstar's resume filled with several achievements, including his acting credits, and NFL tenure... 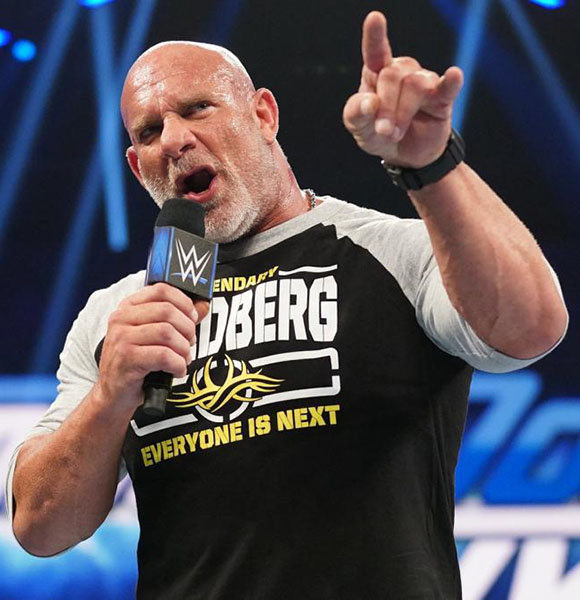 While fans have seen him kick asses in the ring, many are not aware of the softer side of legendary wrestler Bill Goldberg. A devoted family man, Goldberg even returned from retirement to fulfill a wish made by his son.

Awarded with honors & titles during the career, the former WWE superstar's resume is filled with several achievements, including his acting credits, and NFL tenure.

Amid his several accomplishments, being a happily married man is one of Goldberg's most significant feats.

The veteran wrestler is married to a stunt performer named Wanda Ferraton since 2005. The couple first met while working on the 2005 slasher movie, Santa's Slay.

Although both Goldberg and his now-wife were committed at the time, they immediately broke up with their respective partners. The couple's romance turned serious soon, and they got married the same year in 2005.

In May 2006, his wife gave birth to a healthy baby boy named Gage A.J. Goldberg. Gage, who is 13 now, was the reason for his father's much-anticipated return to WWE in 2016. The Survivor Series 2016 was also the first time Goldberg's wife & son saw him live in the ring. With such a loving family by his side, his retirement from WWE indeed wasn't dull.

Bill Goldberg (full name: William Scott Goldberg) is a Tulsa, Oklahoma native. He was born on 27 December 1966. Raised in a family of Ethel and Jed Goldberg, Bill grew up alongside his brother Mike.

He played football during his years at the University of Georgia and even played NFL for multiple seasons. Bill eventually sought a career in wrestling after suffering an abdominal injury in the NFL.

Starting from WCW, he went on to become a regular in WWE. During his wrestling career, he won several titles including the prestigious Universal Championship and World Heavyweight Championship.

However, due to feuds with WWE management, he retired in 2003 with a rare appearance on various occasions.

Other than his wrestling career, the 52-year-old also tried his luck in acting. He performed in TV shows and movies including The Longest Yard, American Satan, The Apprentice, Bullrun, Check Point, and more.

Now, with a $14 million net worth, Bill maintains a luxurious lifestyle in an expensive $2.5 million home in Bonsall, California and several classic cars at his garage.

Being a wrestling legend, Bill is always focussed on his health, which is why he can kick asses even at the age of 52.

The WWE legend stands tall at the gigantic height of 6 feet 4 inches (1.93m) while maintaining a suitable weight of 129 kgs.