By LRU Writer | On: January 15, 2020
Brad Falchuk is a screenwriter and producer...directed many episodes of series like...married his wife on 29th September...the grand wedding...kids with his ex-wife...ex-husband Chris Martin, the frontman of Coldplay...went on a double date with Chris and his new wife, Dakota Johnson...co-created with Ryan Murphy...has a net worth of...at the age of... 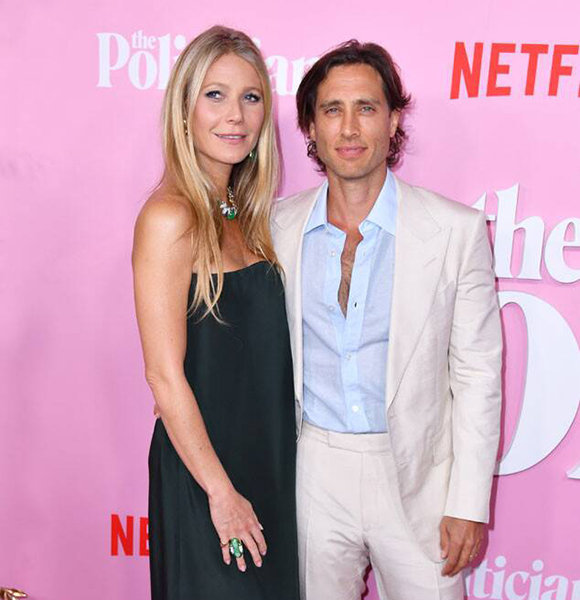 Brad Falchuk is a screenwriter and producer best known for his work in Glee (2009) and American Horror Story (2011).

The couple exchanged vows in front of 70 guests full of celebrities. Some of the big names present were Robert Downey Jr., Cameroon Diaz, Liv Tyler, Kate Hudson, Julia Roberts, Steven Spielberg, and Jerry Seinfeld, among many others. Brad Falchuk with wife Gwyneth Paltrow during their wedding on 29 September 2018 (Photo: Goop.com)

The bride wore a beautiful dress by Pierpaolo Piccioli of Valentino while the groom wore a dashing suit.

Despite being married in September of 2018, the couple didn’t move in together until November of 2019. Gwyneth clarified on their decision regarding the late move in an episode of Jimmy Kimmel Live! on 2nd October of 2019.

Gwyneth said that it was to let their families adapt to the change. Both Brad and the Iron Man actress have teenage children, and they decided that it was best to let the dust settle and take things slow.

In addition to the abovementioned oddity of the couple living separately despite being married, the couple only spent four days together in a week. When asked about it, Gwyneth replied that it had worked for them. In her own words:

Oh, all my married friends say that the way we live sounds ideal and we shouldn’t change a thing.

As of now, the couple is happy together, crediting each other on interviews.

Gwyneth also has two daughters, Apple Martin and Roses Martin, with her ex-husband Chris Martin, the frontman of Coldplay.

She is also on friendly terms with her ex-husband. In fact, the GOOP founder and Brad went on a double date with Chris and his new wife, Dakota Johnson.

Brad is a very successful screenwriter and producer. His most iconic works are those he co-created with Ryan Murphy. The duo is a big name in the television series industry and has made some of the biggest works in the last two decades.

He has writing credits for 18 works and also produced 12 of them. According to celebritynetworth.com, he has a net worth of $20 million.

His wife, on the other hand, has an astonishing net worth of $100 million.