By LRU Writer | On: November 14, 2019
When you are competing in one of the best leagues in the world, one has to be in the best shape of his/her life. In contrast, if you have any kind of injury or have been diagnosed with anything bad, it becomes a challenge, just to be able to survive among the best athlete. 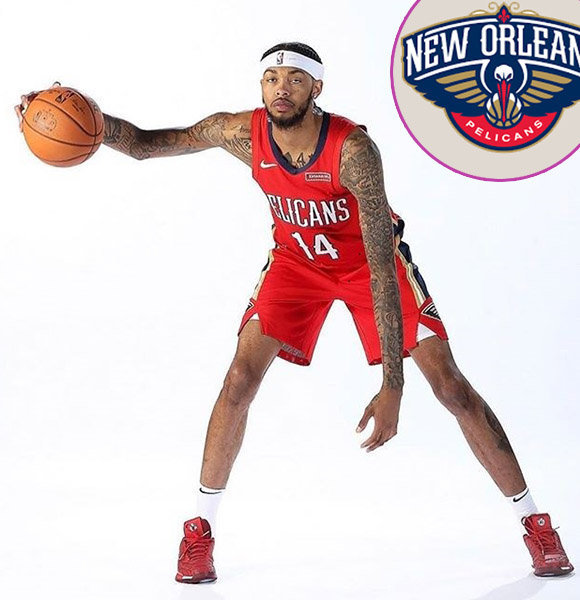 When you are competing in one of the highest leagues in the world, one has to be in the best shape of his/her life. In contrast, if you have any injury or have been diagnosed with anything terrible, it becomes a challenge to be able to survive among the best athlete.

Indeed, New Orleans Pelicans # 14, small forward Brandon Xavier Ingram’s 2019, has been full of injury, recently with a knee injury in mid-November 2019. However, he has been beating the odds as MRI came back clean, making him eligible to push forward the 2019-20 season with the season average of 25.9 with 7.3 rebounds.

Even before he joined the Pelicans, he missed the second half of the 2018-19 season with Los Angeles Lakers after being diagnosed with a deep venous thrombosis in his right arm, earlier in 2019.

Who Is Brandon Dating? Age?

The personal relationship of the Power forward of Pelicans has been a subject of interest for many ladies. Good news, the 22-years-old NBA star is possibly single, as of November 2019. There is no controversy regarding his personal life in the 2019-20 season.

However, a year ago, in November 2018, there were rumors of the star athlete being in the middle of a love triangle. Brandon was linked with Amber Washington, supposedly his girlfriend and also with an exotic dancer named Raelynn Inez.

Of course, the NBA star was silent about all these rumors and had not acknowledged or posted any posts or photos of either woman. One thing was sure that he bought the 2018-19 season for both women to attend his games, and it led to an argument among the two women about who got the better seats in the court.

Even though Small forward for Pelicans has shown superstar potential, but he has failed to play more than 60 games in either of the last two seasons.

On the brighter side, Brandon and his 2016 Draft friend Brown are the first available for contract extensions after the 2019-20 season.

When the Basketball star stretches his arms, you could read the words engraved in black and grey:

Live for Today, Pray for Tomorrow.

The tattoo does justify the world he came from; it is the story of how he grew up, where everything that you took for granted could be taken away from you in a split of a second. In his own words, nothing is promised, he explained:

I can't name the number of guys, my friends that are dead before the age of 17 or are in jail.

Further, he got hands supped in prayer tattoo, whose blueprint we drew himself, on his right shoulder. Furthermore, he got a portrait of his great Aunt, Leatha Smith, who cooked and took care of him, on his left leg. These are few among his 46 tattoos and their meanings. Apart from his tattoos, Brandon has also been in media for his hairstyle, especially by his ex-teammate Kyle Kuzma, who captioned his curly down hair as ‘Thriller,’ one of the titles of Michael Jackson’s song.

Former Lakers star was born on 2nd September 1997 in North Carolina, to Donald and Joann Ingram. He has two older siblings, Donovan and Brittany.

Brandon was a superstar high school player, who led his school, Kinston, to four North Carolina state championships, and earned two straight Free Press Player of the Year Awards. He also played one season of college basketball at Duke University.

One Of the Prominent Faces Basketball:- Mike Krzyzewski Salary, Net Worth, House, Contract

The star player was nicknamed tiny dog, as he is only slightly above 6 feet (2.01 m) and weighs 86 kgs, but he would go against anyone.