By LRU Writer | On: September 22, 2019
Devin Booker is breathing a shy of relief as one of the two ladies have denied the...got busted cheating with Khole Kardashian's daughters...news of making his high school daring pregnant turned out to be fake but, there was still a dark cloud revolving around him and the...was a child while his mom Veronica Gutierrez took care of him and his half-sister... 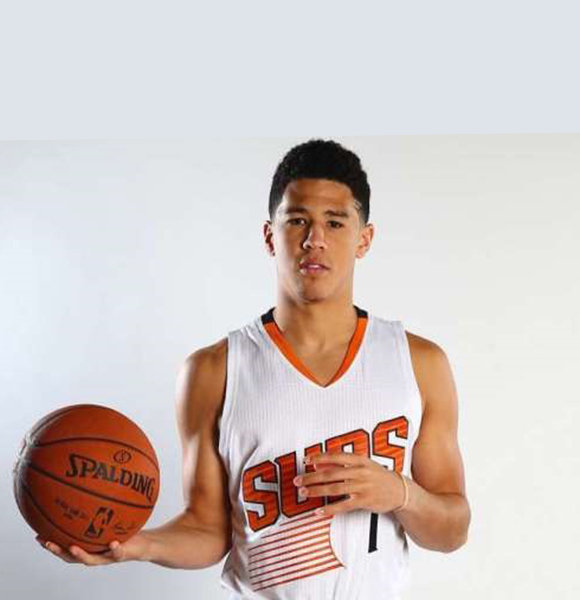 Once accused of making two women pregnant at the same time, the Pheonix Suns shooting guard Devin Booker can now breathe a sigh of relief. One of the two ladies has denied the previously made accusations.

At the beginning of 2019, Devin was in big trouble when news spread that he got Instagram model Aaleeyah Petty and his high school darling pregnant at the same time. During the time, he was also rumored to be dating a third girlfriend, Jordyn Woods.

While his high school darling denied the star athlete as the baby father, there are still doubts regarding his affairs with the Instagram model.

2019 did not start well for the Phoenix Suns star. He was involved in the drama - which cost Devin both fame and time.

The incident took place in February 2019, Kylie Jenner’s best friend, Jordyn Woods got busted cheating with Khloe Kardashian's boyfriend, Tristan Thompson. Devin quietly called it quits with the Instagram star and did not get involved in the Kardashian business.

After that, the 22-year-old had to clear the accusation of making two women pregnant at the same time. Interestingly, the news of the athlete getting his high school girlfriend pregnant turned out to be fake. But, there was still a dark cloud revolving around him, and the Instagram model Aaleeyah Petty.

Aaleeyah continuously hinted her fling with the basketball star in her Twitter, but there was no conclusive evidence to prove the youngster guilty. Up until now, there are still doubts regarding the matter.

Devin Booker was born in Michigan and celebrates his birthday on 30 October every year. He possesses a mixed African-American and Mexican-Puerto Rican ethnicity from his parents.

His dad Melvin Brooker played professional basketball back in the days while his mom Veronica Gutierrez took care of Devin and his half-sister, Mya Powell. Though his parents never married, the family bond was ever-present among them. Growing up, Devin was a healthy and active child. However, the same could not be said to his sister Mya. She is suffering from a microdeletion syndrome which hinders her development due to an imbalance in chromosomes.

Mya's big brother Devin supports her in every stage of her life and considers her as his primary source of inspiration.

Devin Booker - aged 22 - did not find himself short of inspirational figures while pursuing a career in basketball.

As a child, Devin grew up idolizing his father, who was one of the most significant youth sensations at his time. Devin would often visit his father to see him play during the summer holidays. Soon, it was time for the shooting guard to step up in his father’s shoes.

He attended the Moss Point High School - where he went onto play the majority of his junior-level basketball. During that period, he averaged 23.6 points with 8.5 rebounds and 3.1 assists per game, making him a five-star prospect heading out in college.

In 2014, Devin enrolled to play for the Kentucky Wildcats and helped his team win 38 games in a row as a rookie. Furthermore, his performances in the college team booked him a spot in the 2015 NBA Draft where Phoenix Suns picked him.

Playing for the franchise in 2017, he broke the club record registering 70 points in a single game. Still improving in every passing day, the Michigan native has a lot more to showcase up his playing arsenal.