Brenda Song After Nearly Getting Married & Pregnant Talks; Who Is Boyfriend?

By LRU Writer | On: August 28, 2018
American actress Brenda Song, who got into fame after starring in The Suite Life Off Cody And Jack, has always hit the headlines for her dramatic relationship. The Carmichael native was in a long yet on-and-off relationship with her boyfriend before they parted ways. And as of now, Brenda has moved on with her new boyfriend. Brenda was spotted wearing her engagement ring again. 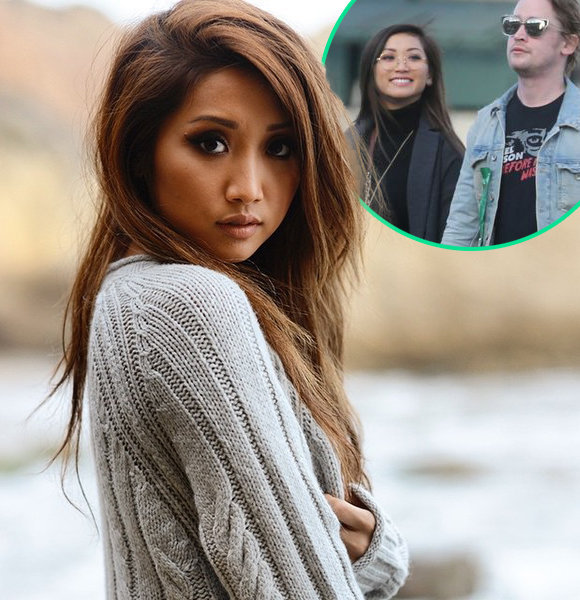 American actress Brenda Song, who got into fame after starring in The Suite Life Off Cody And Jack, has always hit the headlines for her dramatic relationship.

The Carmichael native was in a long yet on-and-off relationship with her boyfriend before they parted ways. And as of now, Brenda has moved on with her new boyfriend.

The 30-years-old actress Brenda and boyfriend Trace Cyrus, who is the brother of Miley Cyrus, had an on-and-off relationship of seven years.

The pair were friends for years through Miley before they started dating. They publicized their relationship when they appeared at Nylon magazine's Young Hollywood Party together back in 2010.

Soon, after them being public about their affiar, there were rumors that Brenda was pregnant with Trace's child. While both of the lovebirds chose to stay tight-lipped about the issue, Brenda's mom spoke out and denied the claims.

In an interview with the Star magazine in September 2011, Brenda's mom stated that the allegations were very upsetting as it questioned Brenda' character on having a child without a husband and getting married After a month, the pregnancy rumors faded away with the happy news of Brenda and heavily tattoed, Trace being engaged. Brenda said "Yes" to Trace when he asked her to marry him in October 2011.

The lovebirds even bought a house to live together in the early month of 2012. Alas, Traces' statement of breaking up with Brenda hit the headlines in June 2012. He stated,

"Brenda and I have decided to go our separate ways, We will continue to focus on our careers. I wish Brenda the best and much success in the future."

Later, both of them were seen with a respective new partner, but in June 2013 the pair rekindled their love. They flaunted their relationship in social media while Brenda was spotted wearing her engagement ring again.

However, in 2014 their relationship faced bumps as Brenda deleted every picture clicked with Trace from her social media. Trace also referred to someone in his tweets and wrote, "I won't forget about you baby," probably for Brenda.

But despite that, the pair again was seen holding hands as they posed arm-in-arm beside the pacific ocean in June 2015. However, the relationship of the two remained confined until Trace was spotted with a new girlfriend in August 2017, making it appear that he has moved on and broke up with Brenda.

As of now, Brenda has also moved on and is quite smitten with her new boyfriend.

Brenda, who belongs to Hmong and Thai ethnicity, is dating actor Macaulay Culkin, the star of 90's hit Home Alone and its other sequence.

The pair first met at the set of their drama movie, Changeland and were rumored to be dating when they were seen having dinner together in L.A in July 2017.

The rumors became more enriched with the truth when the pair frequently made a public appearance. They were photographed shopping together at Monoprix in Paris in November 2017 and had," at Knott's Scary Farm. Brenda Song leans to Macaulay Culkin's shoulder as they take a stroll in Paris in December 2017 (Photo: justjared.com)

Confirming the rumors, the duo even kissed on the lips in public in December 2017. They also had dinner with Macaulay's goddaughter, Paris Jackson making it apparent that Branda is getting closer to Macaulay's dear ones.

You May Find Interesting:- Jordan Lane Price Got Married? Her Status After Dating Affair With Actor Boyfriend

While its evident that the pair is dating and replenishing their time together, the lovebirds are yet to open the silence on their relationship.

Most recently, on 26 August 2018, Brenda and her boyfriend were spotted arriving back to New York. The couple had earlier celebrated their romantic vacation in Paris, during which the pair was also pictured in front of the Louvre Museum. However, for his 38th birthday, Macaulay decided to return back to New York where he could spend some quality time with his goddaughter, Paris Jackson. Paris, who is the daughter of deceased pop and dance legend, Michael Jackson, is a close friend of the former child actor and has known him since her childhood.

Later, Brenda posted a romantic birthday wish for Macaulay through Instagram, where she wrote,

"Happy birthday @culkamania! You’re the absolute best. Thank you for being you."

She also shared a picture, but not of Macaulay in order to avoid suspicions that they have been dating in real life.