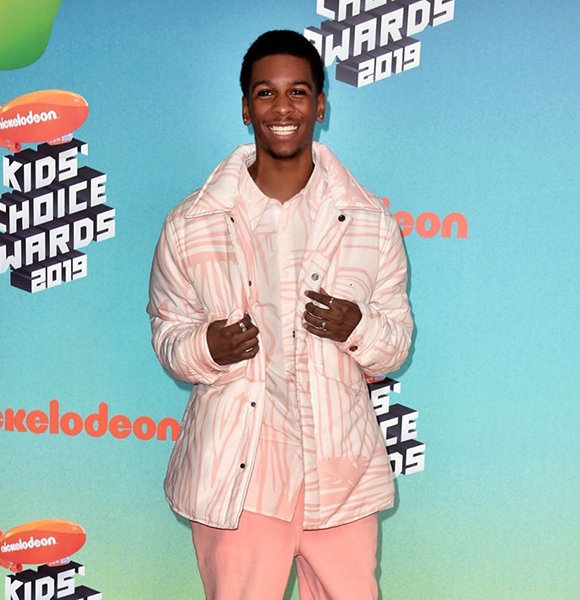 American actor Brett Gray showed his acting potential playing Jamal Turner in the coming of age comedy, On My Block.

His name became more relatable to people as he starred in the Netflix series When They See Us. Further, Brett has appeared in some notable movies and TV series such as Chicago P.D., Law & Order: Special Victims Unit, and Ardmore Junction.

Apart from his acting career, the Philadelphia native has also excelled in singing and songwriting.

Get a glimpse of his life story and find out how a tiny spark can burst a mighty flame.

Brett was born to Jeffrey and Holly Gray on 7th of August 1996. The actor of African-American ethnicity was brought up along with his elder brother in a family of four.

When Brett grew up to be an eight-year-old, his mother enrolled him in the New Freedom Theater Program in Philadelphia. By the age of ten, the little stager was already on for his first professional show titled Little Eyolf at the University of the Arts.

His family also supported him in terms of his acting career. Hence, he pursued stage plays at school. People were amazed by his entertaining performances and praised him for giving them have a great time.

The comic actor stands at an incredible height of 5 feet and 9 inches (1.73m). The height he has reached profession wise is equally praised. He released his debut single titled Old Thing Back described as "a sunshine-drenched slice of laid-back R&B" by NME and also got his big break on Netflix in 2018. Till date, the young adult counts among the few who balance both acting and singing career appreciably.

Brett does not like to share much of his personal life. It certainly wouldn’t be a secret if he did. However, he spills some beans for his curious fans, occasionally.

On 23rd September 2017, the Last Song hitmaker Instagrammed a picture of himself with a lady cast-mate placing her hands on his shoulders. Of course, his followers went gaga over the post, yet the actor himself adhered no confirmation. On 23 December 2018, Brett urged his willingness to have a girlfriend via a tweet.

It seemed that Brett was indeed looking for a new romance when he put up a video on Instagram on Valentine's Day 2019. The video featured his dog as he wondered if someone could be his valentine.

Like every other celeb - who became a victim of gay allegations after playing a gay-centric role - Brett was not an exception. His career mounted to the next level with the show On My Block, which presented the life of high school teens dealing with challenges of adolescence and neighborhood.

The problems also included gay violence and bullying, frequently emphasizing them as crucial issues. As Brett went on portraying a role that addressed such issues, his real-life sexual orientation was questioned by many. Brett hasn't answered the questions officially, leaving room for all to wonder if he is gay offscreen.