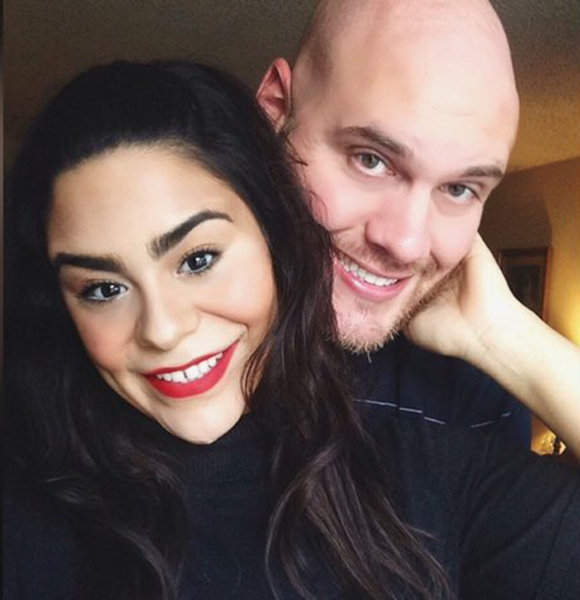 Finding a soulmate can be like a fairy tale to most people; beautiful to think about but not very practical in real life. However, for American actress Jessica Marie Garcia, the fairy tale turned out to be accurate as she found her prince charming in the form of a loving husband.

And it seems like their story is indeed written in the stars as the couple is having a blissful time together. But, let's see what the future holds for the Liv and Maddie actress and her boyfriend-turned-husband.

After a long time relationship, Jessica and her partner Adam Celorier got engaged in January 2016.

The couple took a trip to San Diego to celebrate their engagement along with their friends, including Joey Bragg, Lucas Adams, Shak Ghacha, Shelby Wulfert, and Audrey Whitby. Jessica then shared the big news with friends and family through an Instagram post. After their engagement, the couple remained off the spotlight for some time, and in 2017, Jessica came forward with another big news. Jessica disclosed the names of her bridesmaids.

Meanwhile, the couple enjoyed their engaged time together as they were spotted having a good time in the Natural History Museum of Los Angeles County. Jessica posted a picture where the two gave a frightened look in front of a dinosaur sculpture. Similarly, the couple was also spotted celebrating Jessica's birthday, and to mark the event, Adam shared a picture on his Instagram. It looks like the couple wanted to seek the thrill of their life before settling down and starting a family.

After remaining engaged for more than two years, Jessica and Adam finally decided to get married.

The couple exchanged their wedding vows in front of their guests, which consisted of close friends and family members.

In the ceremony held in October 2018, Jessica's bridesmaids included celebs like Kira Kosarin, Shelby Wulfert, and Audrey Whitby. However, her close friend Dove Cameron wasn't present at the wedding, probably due to the shooting of her new musical, Clueless.

Jessica and her husband exchanged a final kiss witnessed by their guests as they initiated their married life. Recently, the married couple welcomed their firstborn. A baby daughter Selena on February 8, 2022.

Jessica, age 35, was born on 23 March 1987 in Orlando, Florida. Her parents were initially from South America. However, Jessica's father is from Mexico, whereas she has Cuban blood on her mother's side. The actress introduces herself as a Latina, according to her Instagram bio.

Jessica first thought of becoming an actress after watching Jennifer Lopez on Selena. And eventually, she became one of the recognized faces in Hollywood. She is well known for portraying the lead character, Willow, on Disney's Liv and Maddie.

And as of now, she is currently working on Netflix's On My Block, Batman Unburied, and Go Off with Jess & Julissa and has accumulated a net worth of $1 Million, according to Celebrity Net Worth.

Witnessing her happy life, we cannot wait to update you guys more on her!