By LRU Writer | On: October 23, 2019
American actress Bridget Mendler entered into the entertainment industry with the animated Indian film, The Legend of Buddha. But she gained her place among her fans from the Disney's Good Luck Charlie where she is starred as a high school student, Teddy Duncan. Starring in the series, Good Luck Charlie not only awarded the most positive response but also she found the husband-like boyfriend. On the set of series, her on-screen love interest became her real-life boyfriend. 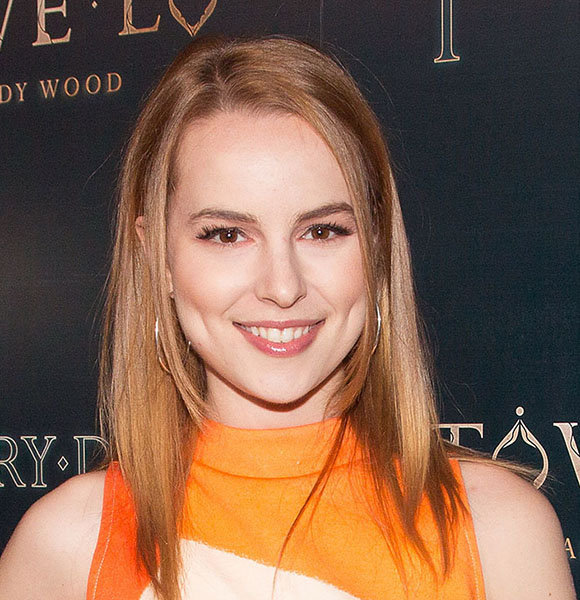 American actress/singer Bridget Mendler entered into the entertainment industry with the animated Indian film, The Legend of Buddha. But she gained her place among her fans from Disney's Good Luck Charlie, where she is starred as a high school student, Teddy Duncan.

Starring in the series Good Luck Charlie not only awarded her with the most positive response but also a husband-like boyfriend. On the sets of the series, her on-screen love interest became her real-life boyfriend.

She revealed her relationship with Shane in an interview with Elvis Duran Show in September 2012. She was asked if she was dating Shane, she responded, saying it took a while for them to form a relationship.

“It wasn’t one of those…’you meet on a set and date instantly,’ it took two years.”

The couple met on the set where they were starred as a high school couple, Teddy Duncan and Spencer Walsh. The couple was just 16 when they met, and she did not want to be with him. The 25-year-old actress even found him annoying. Working together surely built up some chemistry. While working together, they became good friends, and eventually, he asked her to go out. But Shane had to wait for two long years for being in a relationship with her.

Well, the couple had an excellent relationship, which gave birth to a rumor in 2013 that Bridgit was pregnant. The stories of her being pregnant were trending on Twitter, and in response to that, she cleared the confusion. She eventually took to Twitter as she thought the rumors would go away sooner.

“Kinda thought the twitter chatter would have died down by now but no, I’m not pregnant. Haha, you guys are kooks”

But after being in a relationship for four long years, the couple officially parted ways. While their fans and followers had already speculated about their split, the Undateable actress came forth that she's single.

Following her separation from her teenage lover, the breakup hit her so hard that she wrote Atlantis frankly. All her feelings and emotion are gathered onto that song. Shane was her first love, and losing her first love was more than having haunted nightmares.

Well, the split of the young lovebird affected not only the couple but also their followers who were devasted learning about their separation. Their fans could not believe that their love angels broke their hearts. Many questions arose about their breakup on Twitter. Some asked the reason, and some also requested them to get back together.

Yes, Bridgit does have a new partner, and his name is Griffin Cleverly. The two were first seen together in a photo Bridgit shared in 2017. Hence, it might be safe to assume they started dating around the same time.

You Might Be Interested In:- Jason Dolley Reveals 'Maybe' He Is Dating & Has Girlfriend Amid Gay Rumors

The happy duo took their relationship to the next step when they got engaged in April 2019. The duo officially tied the knot in October 2019. The husband and wife seem very happy as they shared the news of the wedding to the world via their Instagram handles.