By LRU Writer | On: August 26, 2019
Brie Larson’s rise in Hollywood started after her incredible performance in the 2015 movie...However, her relationship with the musician Alex Greenwald came to light when...However, the pair took a lot of time planning their wedding as Brie’s career was taking off in Hollywood... 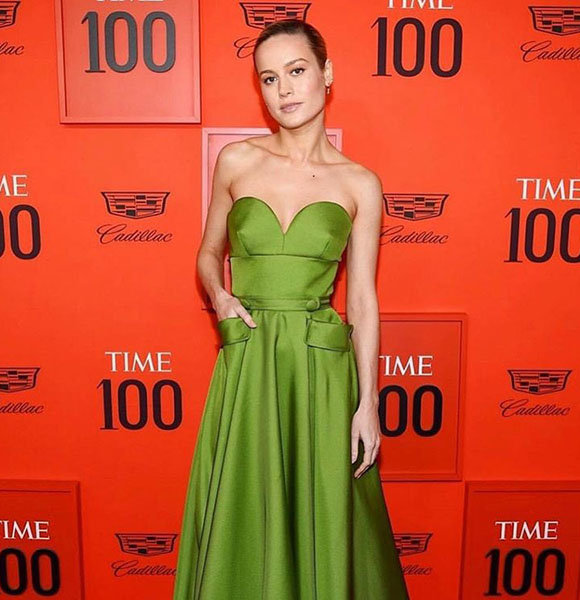 Brie Larson’s rise in Hollywood started after her incredible performance in the 2015 movie, Room. The role brought her most major Hollywood awards including Oscars, Golden Globe, and SAG Award, the following year.

Following the award full sweeping year, she got cast as the female superhero, Captain Marvel.

The acting power is an outspoken feminist and a founding member of Times Up movement- which works to make Hollywood a safe place against sexual abuse. Further, she has used her voice to speak for less gay representation in Hollywood.

The actress is a self-proclaimed introvert. Naturally, she shies away from talking about her personal life.

However, her relationship with musician Alex Greenwald came to light when she thanked her boyfriend in her acceptance speech at Gotham Independent Film Awards in 2013. The notoriously private couple’s relationship became more evident during Brie’s award-winning streak in 2016. Alex accompanied his acting connoisseur girlfriend in all her big award ceremonies. In return, the Short Term 12 actress acknowledged her man in her award speeches.

After the incredible time in her career, Brie got engaged to her long-time boyfriend in March 2016. The pair commited to become husband and wife during a romantic trip to Tokyo.

However, the pair took a lot of time planning their wedding as Brie’s career was taking off in Hollywood. Sadly, instead of getting married, the longtime couple ended their engagement in Januray 2019.

Previously, Brie dated John Patrick Amedori in 2008. After dating for four years, the lovey-dovey couple parted ways in 2014. Also, the actress dated actor Cody Linley for a year from 2006 to 2007.

Brie was born to chiropractor parents on 1 October 1989. The Sacramento, California native’s life turned upside down after her parents divorced when the actress was just age six.

For You:- Deborah Foreman Husband, Family, Net Worth, Now

The Oscar winner’s mother took care of Brie and her little sister Milaine “Mimsy” Larson as a single mother. As for the 29-year-old actress’ father, she stopped seeing him after age 16 and had remained estranged from him until 2016. It is unclear if the father-daughter duo has reconciled their relationship since then.

Brie boasts a net worth of $10 million. Her wealth comes from her status as a leading lady of Hollywood. Her filmography consists of movies, namely 21 Jump Street, Scott Pilgrim vs. the World, Sleepover, and Remember the Daze.

Also, she was part of projects namely 13 Going on 30, Hoot and Farce of the Penguin.

In 2019, it was announced that Brie would headline Apple’s show titled Undercover: Coming of Age in the CIA.

Interestingly, Brie is also a musician. She released an album called Finally Out of P.E. in 2005. Also, she lent her vocals in 2010 film, Scott Pilgrim vs. the World, and Metric's Black Sheep song.