Camryn Grimes Reveals That She Is Bisexual! Insight On Her Dating Life

By LRU Writer | On: July 01, 2021
American actress Camryn Grimes best known for portraying Cassie Newman in the series The Young and The Restless came out as bisexual through a tweet on 23 May 2020... 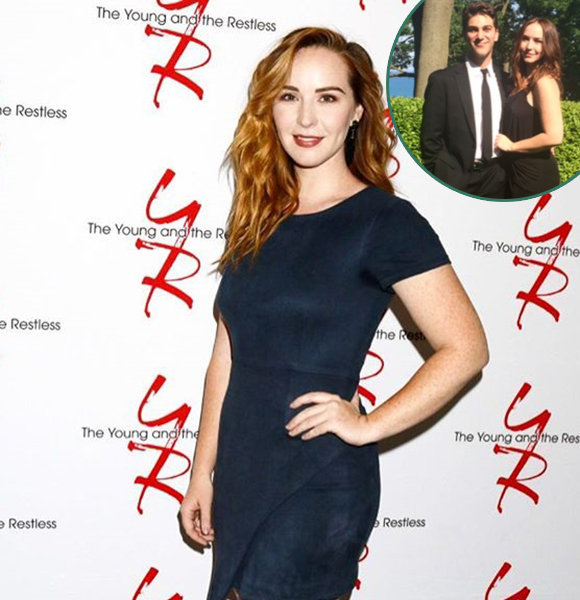 American actress Camryn Grimes best known for portraying Cassie Newman in the series The Young and The Restless came out as bisexual through a tweet on 23 May 2020.

Long before Grimes came out as a bisexual, several rumors claimed that she was a lesbian.

Camryn first surprised fans and the LGBTQIA+ community when she kissed her The Young and the Restless co-star, Cait Fairbanks, during the episode aired on 2017. In the episode that premiered on the 3rd of August, Camryn's character Cassie and Cait's Tessa share a passionate kiss even though none of the characters are lesbian in the show. Their intimacy hinted towards a potential romantic relationship between the two, but CBS executives refused to comment on the issue.

Talking about her perspective onscreen love, Camryn mentioned that the romance between the two characters was "spontaneous and intense." She said in an interview,

"I think with a love like theirs, it was so spontaneous and intense and so strong that it caught them both off guard. This is new territory that they are exploring, and it comes with obstacles."

The rumors that Camryn could be a lesbian in real life grew swiftly, and the actress even had to post a tweet (now-deleted) to clear her sexuality among the fans. On 21 July 2018, she shared a tweet mentioning that she was not a lesbian. She wrote on her Twitter-

"Not gay, but if I was I WOULD SHOUT IT FROM THE...ROOFTOPS. Not one part of the LGBTQ+ community is a waste. Shame u can’t see that."

However, after almost two years, she took a big step and came out as a bisexual woman on 23 May 2020. While replying to a tweet.

Camryn is in a relationship with Brock Powell, a voice-over artist. His credits include Phineas and Ferb, the Movie: Candace Against the Universe, and Mickey Mouse Mixed-Up Adventures.

They started dating in March 2020 but made their relationship official only on September. She introduced her boyfriend through an Instagram post, and the caption read-

Well, he made it on the grid. Oh boy this is gonna go straight to his head.

My hair’s too long & life’s too short. But while everyone learned how to make sourdough bread, I went ahead and fell in love with a redhead.

As of now, the loved-up couple has completed their one-year anniversary.

Before dating Brock, Camryn was in a relationship with Oliver Singer, the son of television writer Steve Singer, in 2012. However, the relationship was not made public until 2014.

On 22 June 2014, Camryn and Oliver made their first public appearance together on the 41st Annual Daytime Emmy Awards held at The Beverly Hilton Hotel in Beverly Hills, California. The couple even posed for a picture and looked comfortable, enjoying each other's company. A year later, on 26 June 2015, Camryn revealed that the pair had been dating for three years and wished her partner on their anniversary while expressing her gratefulness towards Oliver. She wrote on her Instagram post (now deleted)-

"1094 days 19 hours 2 minutes & 15 seconds spent with you. Every minute precious and every second important. I'm as grateful as ever to be able to laugh, live & love by your side. Happy Anniversary @oliver_singer!!"

On 10 May 2016, she shared a picture alongside Oliver from their holidays in Sedona, Arizona. After that, she didn't post any pictures with her then-boyfriend and deleted all their pictures together from her Instagram. While fans suspect that the pair could have broken up, neither Camryn nor Oliver has come forward to talk about their alleged breakup.

See Also:- Dayanara Torres Goes Candid On Husband, Kids & Boyfriend; All There Is

Is Camryn Pregnant In Real Life?

Back in March 2017, Camryn shocked everyone after becoming fake pregnant to land a part in the series, The Get (2017). Many believed that she might have been pregnant off-screen as well. However, Grimes cleared the air through her post of 5 March 2017, where she posted a picture on her Instagram showing her prop belly. Her bio reveals that she is the youngest to receive the Daytime Emmy Award for Outstanding Younger Actress in a Drama Series, which she was honored in 2000 at the age of 10.

Camryn, who initially played Cassie Newman's role in the TV series The Young and the Restless from 1997 to 2005, later returned on the show in 2014 as Mariah. She even won a 2018 Daytime Emmy in the category of Best Supporting Actress for her role in the show.

Further, Camryn has worked with several famous actors, including Hugh Jackman, Halle Berry, and John Travolta, during her career.