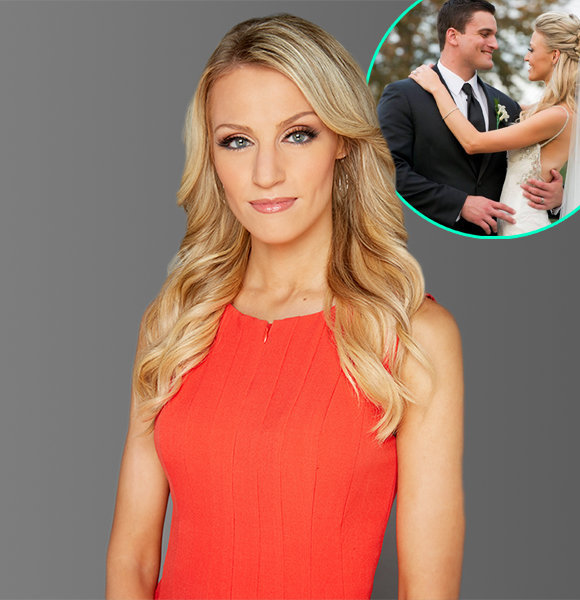 The fresh face of Fox New's Channel, Carley Shimkus has been the network's associate producer since 2012, but apart from her profession, she has also been weaving her blissful married life.

The reporter has been married to the man of her dreams for more than six years, and inspired by her parent's love story; she is taking it further every year.

Who is Carley Shimkus's Husband?

Also, the producer for Don Imus' radio show, Carley Shimkus, is happily married to her boyfriend-turned-finance Peter Buchignani, a businessman in the Business Development department for Amherst Pierpoint Securities.

Carley first met her husband on her 23rd birthday. After dating for a while, the couple decided to exchange wedding vows in August 2015. The wedding ceremony took place at  Fiddlers Elbow Country Club in Bedminster, New Jersey, among their close friends and family.

See Also: Did Brent Steffensen Split With His Potential Wife? Ends Dating Affair With Girlfriend But Not Professional Relationship

It turns out they both are die-hard Michigan football fans and did not want to miss out on their dear club, so the couple made it a fun wedding by walking down the aisle to the Michigan fight song on their big day.

Carley walked down the aisle on her white wedding gown, which beautifully complimented her; on the other hand, her bridesmaids wore a pink gown.

The couple has been going strong ever since and is about to celebrate seven years of marriage anniversary this year.

In August 2017, the couple had their second marriage anniversary where Carley marked the day when she added 'Mrs' on her name through a picture she posted on her Instagram.

She posted a picture dating back to her wedding day when she had her last dance with Peter at the ceremony's after-party. In the picture, both had their eyes locked on each other and seemed very in love swaying together.

Carly captioned the picture as,

"Two years as mr. & mrs. Thank you for filling my life with so much happiness (and Michigan football and pearl jam) #buckwild8815" As of recently, on August 10, 2020, Carley posted a similar but adorable picture of them dancing just as the second anniversary, captioning "5ðŸ¤" Carley with her Husband At Their Wedding After Party (source: Instagram)

The couple had all smiles,  through the picture it can be seen that the pair is a sure thing and still going strong with their relationship. Well, they sure are the perfect match for each other!

Even after 6 years of marriage, the couple has yet to update us about having children, but when the time arrives we can be sure to have spammed with adorable baby and family pictures.

While talking about a happily married couple, Carley was surrounded by true love before she even got married.

At the age of 35 and standing at the height of 5 feet 10 inches, she lives her married life while admiring the loving relationship that her parents share. It turns out her parents had a love at first sight experience when they first met on a plane.

While she shares some memorable moments with her love Peter, she does love sharing her parent's adorable love story. Her parents also featured in one of her shows while they made their TV debut.

She was raised under the wings of her parents alongside her older sister, who is an incredible artist and an art teacher.

Carley is a Quinnipiac graduate with a degree in Journalism. She started her career when she first interned with Fox News. She revealed that she loved the place so much that she applied for the job right after her graduation.

She joined Fox News in 2009 and became an associate producer in December 2012. While she is reaching heights in her career, she surely enjoys a good sum of salary adding up to her marvelous net worth.

There is more to come as opportunities and in life for Carley so stay tuned with us for more updates.