Golf media personality Paige Spiranac, who is a social media influencer and heartbeat of most of her fans, has ended all hopes of her fans who wished to have a date with her as she is already taken.

Paige is officially off the market as it turns out Paige has been involved in a loving relationship with her boyfriend and as of now, they are already engaged.

But are they going to get Married?

Well, let us take a look at the insights of her wiki-like-bio which might just answer the question.

Paige Spiranac, the Instagram personality with over 1.6 million followers has broken hearts of her many followers as she has been in a loving relationship with her boyfriend. Paige is dating a minor league baseball player, Steven Tinoco.

The couple got together sometime in 2016. Back then, Steven visited Scottsdale for a bachelor party at the Phoenix Open. During that time he was chilling with his bros at the lobby of Top Golf when he first crossed path with Paige.

Steven immediately recognized her asked for a picture together. Paige, age 25, agreed and took a photo with Steven.

Well, who knew a photo would bring love into her life!

Later, Steven direct messaged Paige on her Instagram sending her photo from the day. According to Paige, it was the nicest DM she ever got on her Instagram as most of the time it would be inappropriate messages relating to body parts.

Steven gathered up the courage and asked Paige out on a date. Paige could not deny and soon romance was sparked between them.

Since then the couple has been going strong with their relationship. According to Paige, Steven is the first man who actually treated her the way she deserved to be treated as she previously had many bad relationships.

Paige, who has a massive net worth, gushed about her boyfriend in which she opened up about how Steven get her flowers and open doors for her. She said,

"So he was the first guy who's ever gotten me flowers and opened up doors for me. He took me on a real date, and it was such a refreshing change from Netflix and chill. He's just a really nice, respectful guy with a good heart. After so many bad relationships I finally met a good one."

Adding to it, their picture-perfect romance has been complimented as now they are set to put a tag onto their relationship. The couple has already been engaged and they might be looking forward to exchanging the wedding vows any time soon. 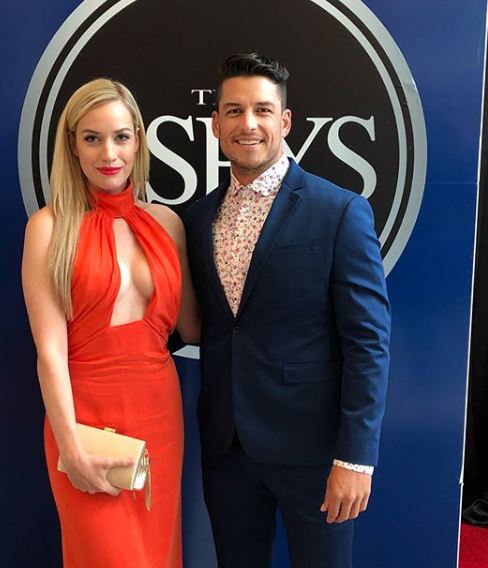 The couple, who often appears in each other's Instagram, has already been engaged. Steven popped the question to Paige back in December 2016. Back when Paige was in Dubai playing in Omega Ladies Masters, Steven tagged in with her through the tour.

You May Also Like:- Michelle Wie Secretly Announced Boyfriend, No One Noticed; Earnings, Net Worth & More

Even though the tour did not turn out as it was expected to, Paige returned home being engaged. She revealed the news of her engagement through an Instagram post back then.

She revealed that she said "yes" to the proposal and showed off her engagement ring.

However, despite being engaged, there has been no news of them tying the nuptial knot. Since their engagement, they have made no statement relating to their wedding.