By LRU Writer | On: January 12, 2020
English glamour model and reality star Casey Batchelor...has been dating...went public with their relationship...getting engaged to her partner...welcomed her first baby with her fiance...had gained quite a lot of weight...followed a strict...documented her whole weight loss journey...pregnant for the second time...bio reveals her age...from her appearance in Big Brother... 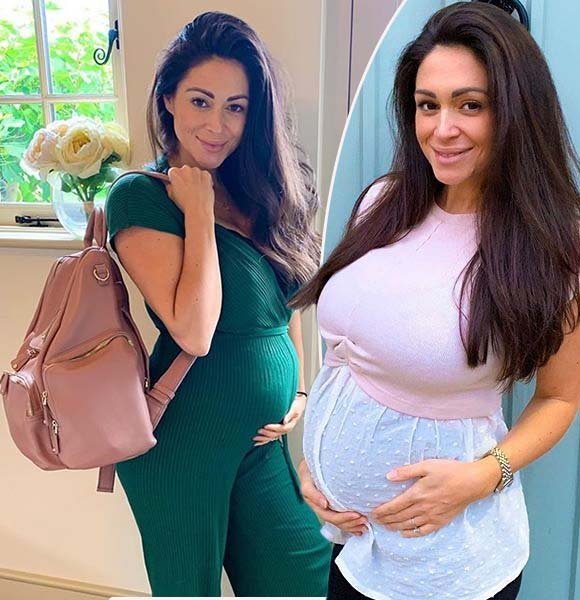 English glamour model and reality star Casey Batchelor is best known for her appearance on the reality series, Big Brother season 13 in 2014. Although she did not win the reality show, she did make it to the finals of the show and gained massive fame.

Further, she is also Miss Maxim 2006. During her career as a model, she has endorsed many brands and been on the cover of many popular men's magazines.

On 25th May 2018, Casey welcomed her first child, a baby daughter named Florence, with her partner (now fiance) Dane Goodson. Casey showing off her pregnant baby bump with her daughter Florence by her side (Photo: Casey Batchelor's Instagram)

As of mid-January 2020, Casey is 38 weeks pregnant with another baby girl.

Casey Batchelor has been dating a businessman from Kent, Dane Goodson, for quite some time.

The couple went public with their relationship in February 2017 and disclosed that they had been secretly dating for the past 18 months.

Further, Casey and Dane have already made their relationship official by getting engaged in February 2019.

Interestingly, the engagement came right after Casey's interview in which she admitted that she was actually waiting for a ring from Dane. In the same interview, she also branded Dane as her 'best friend, soulmate, and partner.'

Her partner Dane took the hint at the right time. Casey's fiance, Dane, works as the managing director at DMG Office Supplies and Print Services. The two crossed paths through Casey's modeling work and fell in love with each other.

After the birth of her first child, Florence, in 2018, Casey had gained quite a lot of weight.

But after a very short time, she got back to her shape with the help of yoga and intense workout.

At first, she started with light yoga and later combined the high-intensity workouts with it and lost a lot of weight. Further, she also followed a strict healthy diet routine very diligently.

Casey documented her whole weight loss journey on her Instagram posting pictures and videos of her routines.

Casey was born on 2nd October 1984 in England to Gary Batchelor and Kim Batchelor.

Her family owned a scaffolding business, and her mother Kim was godmother to Victoria Beckham.