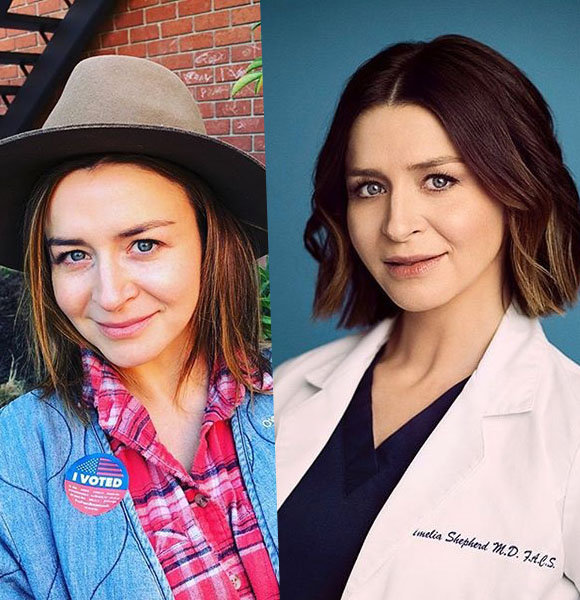 Caterina Scorsone is a Canadian actress best known for her performance on Grey's Anatomy as Amelia Shepherd.

While everyone celebrated the start of the new year and decade in their way, the popular TV personality did so with her third kid, born on December 31, 2019.

Please continue reading to learn more about the actress and her family, including her husband, Rob Giles, and their children.

Caterina was born on 16th October 1981 in Toronto, Ontario, Canada.

She has two elder twin sisters and a younger brother and sister.

She had published news about her pregnancy on 2nd November 2019 on her Instagram. She showed off her baby bump alongside her family, dressed up as the Addams Family for Halloween. The photo was captioned with "Our Family’s about to get even kookier. #pumpkinintheoven."

Caterina is married to singer and songwriter Rob Giles. The two tied the knot on 27th June 2009 and are still happily married after ten years. Together, they have three daughters.

The Grey’s Anatomy actress had to change and learn much after learning about her second daughter’s condition. She opened up about it during an episode of the “Motherly” podcast in March 2019. In her own words:

My whole concept of what motherhood was had to shift. When Pippa was born, and I realized that she had Down syndrome and she was going to have some physical differences and some cognitive differences… I didn’t know what her capacity would be. It really did send me int a tailspin.

Fortunately, she pulled through, and Pippa is living a very happy life with her family, who had a new addition.

Caterina was nominated for the Best Performance by an Actress in a Featured Supporting Role in a Dramatic Series for Power Play (1998) in the 1999 Gemini Awards.

She was nominated for Best Performance by an Actress in a Leading Role in a Dramatic Program or Mini-Series for Alice (2009) in the 2010 Gemini Awards. Unfortunately, she didn’t win the two awards, but she did win the 2012 Prism Awards for Private Practice.

Caterina Scorsone began acting professionally at the age of eight. Her older sister, Francesca Scorsone, is also an actress. She often posts about Down syndrome and how parents can ensure a good environment for children with such differences. She has over 2.2 million followers on Instagram.

On November 14, 2020, she earned the Quincy Jones Exceptional Efforts Award from the Global Down Syndrome Foundation for her advocacy.

In March 2020, Scorsone and Giles divorced. After ten years of marriage, they filed for divorce in May 2020.

Stay tuned to get more updates on Caterina Scorsone.