Chase Elliott, Dating A Keeper! Girlfriend Is No Stranger To NASCAR Revs

By LRU Writer | On: August 06, 2018
If National Association for Stock Car Auto Racing (NASCAR) is your favorite sport, then Chase Elliot must be one of your household drivers.The Georgia native's rise to prominence came after he won 2014 national NASCAR series, making him the first rookie to achieve the feat.However, the young speedster's racing abilities are not the only thing that has created a buzz. Chase made headlines for dating someone, who knows inside out of NASCAR and even came to cheer for him on the racing track. 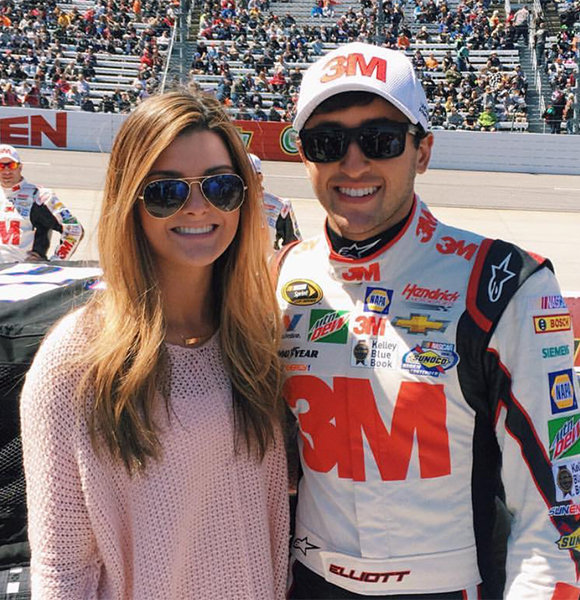 If National Association for Stock Car Auto Racing (NASCAR) is your favorite sport, then Chase Elliot must be one of your household drivers.

The Georgia native rose to prominence after he won 2014 national NASCAR series, making him the first rookie to achieve the feat. However, the young speedster's racing abilities are not the only thing that has created a buzz; Chase made headlines for dating someone, who knows NASCAR inside out and even came to cheer for him on the racing track.

The whole story of your favorite racer is within your reach, scroll down below to explore the complete narrative!

It was not every day's scene that a college girl, barely out of her teens, is rooting for the pole leader, Chase Elliot. Unfortunately, Chase did not turn as the first driver as he consumed up all his fuel and stopped for refueling when there were just four more laps to go.

You May Also Like: One Up for Love! Aspiring Car Racer Brad Keselowski gets Married to his Longtime Girlfriend Paige White

He finished fourteenth on track but was still the number one for the college girl, Kaylie Green. Kaylie and Chase stole the show despite not landing any awards that day.

Kaylie, who tweeted later after her boyfriend got back from the lead, has been reportedly dating Chase. Though Kaylie is open to cheer for her boyfriend on the racing track, the couple has not shared their dating details. The pair has kept their dating timeline and romantic relationship a secret.

Though the two has not revealed, they might click due to their NASCAR ties. Chase is a professional NASCAR racer himself, while his girlfriend is a daughter of a former NASCAR driver David Green and the sister of a NASCAR driver as well. Despite the secrecy, the couple is open to sharing moments. They go skiing, skating, watch football together and are even pictured together on romantic outings. Chase's 22-year-old is a student at the University of South Carolina, who is majoring in public relation, journalism and mass communication.

It might be the reason that the couple is yet to get married. Kaylie is working as an intern for Charlotte Tech Company and Blueline Technologies and is yet to finish her college.

Furthermore, Chase also has yet to fulfill the potential that made him one of the most highly rated young driver in the NASCAR driving series.

Popular Driver Of The Year Later, the young racer was named the NASCAR Xfinity Series’ most popular driver of the year in 2015. Similarly, Elliot was chosen as the rookie of the year 2016 for the sprint cup series.

In due course, he got involved in a controversy after the officials courted controversy for violations related rear window. The incident cost Elliot 20 driver points, and the team was fined 20 team points.

His crew chief also got suspended for two races on 11 April 2018. The group incurred similar deductions in for violations related to rear wing suspension on 15 March 2018, culminating with a deduction of 25 driver points for Elliot.

Similarly, he also competes in the Xfinity Series driving no 88 Chevrolet Camaro for JR Sports. The talented driver has already amassed a net worth of $ 2 million in his burgeoning career and still has his best days ahead of him, which will surely boost his coffers.

With the massive potential to be one of the greats of NASCAR series, the sky is the limit for the talented Elliot, don't you think so?

Chase Elliot claims his first-career Monster Energy NASCAR Cup Series held at the Watkins Glen. Elliot, who has previously finished as a runner-up eight times in his career, took home his first checkered flag in his 99th start.

See Also: NASCAR Racer Danica Patrick Is Need Of Of Some After Sponsor Nature's Bakery Turned Their Backs; Will Support Come?

While Elliot was in a one-on-one battle with Martin Truex Jr., Martin fell short on fuel which led Elliot to bobble on the final lap. Despite the strong push, Elliot was able to hold off Martin in the final laps which took him to win the cup series.

With this historic win for Elliot, he now has secured his spot for three straight seasons in the NASCAR Playoffs. Only this time it is through the way of victory lane. After the win, Chase credited Kirby Smart, the Georgia football head coach for his motivation.