By LRU Writer | On: March 19, 2019
Chris Harrison Ends Married Life In Divorce - Bachelor Host Is Bachelor Himself The longtime host of the most popular dating reality show, Chris Harrison, ended up his long-term married life with divorce. However, after passing through heart failure detachment from his wife, it is likely that he is hooking up with some other beautiful ladies. Is he dating someone now? 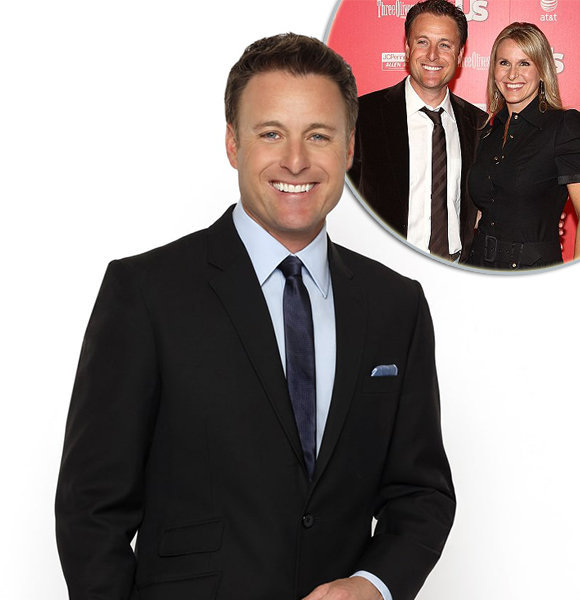 The longtime host of the most popular dating reality show, Chris Harrison, ended up his long-term married life with divorce. However, after passing through heart failure detachment from his wife, it is likely that he is hooking up with some other beautiful ladies.

Chris Harrison and his wife, Gwen Jones, got divorced in 5th May 2012 after staying in 19 years of married life. The high school sweetheart, who got married in 1993, revealed their split up in a joint statement that read:

Though we have made this incredibly difficult decision to separate, our love and mutual respect remain, and we look forward to sharing in the lives of our wonderful children,"

The pair have parted their ways but remains close friends. They are amicably sharing the custody of 15-year-old son Joshua and 13-year-old daughter Taylor. Hinting the wonderful bond that Chris shares with his children, he shared a picture with them on Instagram.

The photo was captured during the party time of the bachelorette event. Even after their divorce, Chris and his estranged wife continued to remain in touch for the sake of their two children, despite the difficult circumstances. After a split up, critics of the reality competition secretly hoped that there was some sort of scandal behind the high school sweethearts' split. However, Harrison gave the clear-cut image by attributing lack of communication as a cause of separation and insisted that the breakup was amicable.

Shortly after a divorce with Gwen, TV show host, Chris was busy spending time with his new girl in 2013. Chris was reportedly going out with California native, Kelly Sarac.

This blonde and beautiful girlfriend of Harrison was a divorcee herself; Kelly was previously married to Tommy Sarac and is a mother of 3 children.

However, as of now, it is likely that they are no more in a love affair as they haven't come up publicly about their relationship. They probably have parted their ways, but on the other hand, they might be keeping their romance behind the curtains.

No doubt, the host of Bachelor has been surrounded by alluring beauties on the show for more than 15 years. However, he is still a bachelor and seems that he is not dating someone.

Furthermore, back in 2014, while speaking with YourTango, he affirmed that he never took any of the Bachelorette as an opportunity while hosting Bachelor show.

Although Chris was linked to few women in the past, he never confirmed any of the rumors. The literal cupid on The Bachelor; he finally found his match. His girlfriend is Lauren Zima, a host and senior producer for Entertainment Tonight.

Well, the couple sure looked very much in love when they made the red carpet debut on 27th January 2019 at a pre-Screen Actors Guild Awards party at the Chateau Marmont. Chris and his girlfriend’s debut came a long time after they started going out. Dating since summer 2018, they took their sweet time to make the dazzling appearance.

However, it is not known how the couple got together. Since Lauren comes from the same industry, there is a possibility they knew each other before being romantically involved.

Also, Lauren’s job description at Entertainment Tonight includes interviewing guests and Chris interviewed multiple times for his show The Bachelor. Maybe the love-birds’ job brought them together. Only they can tell!

American Game Show Host The Bachelor Bachelor in Paradise The Bachelorette Who Wants to Be a Millionaire? Gwen Harrison