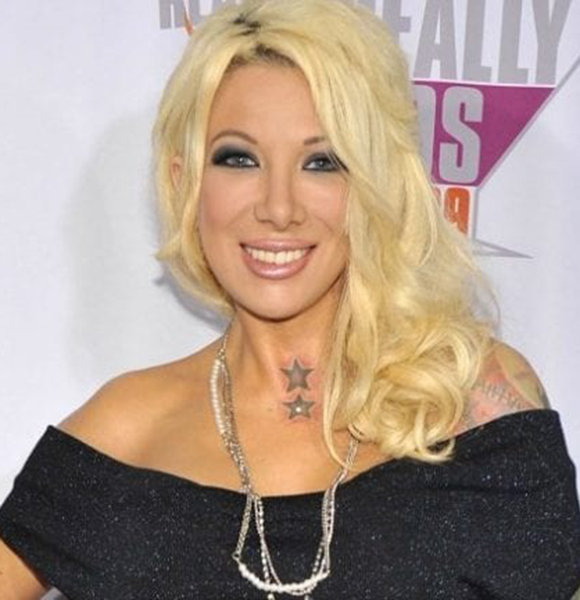 Daisy de la Hoya shot to international stardom around 2008 after appearing in the second season of Rock of Love. Awed by her god-given charisma, VH1 eventually gifted the musician-turned-reality star her own showed titled Daisy of Love.

But the musician doesn’t seem to have any updates nowadays.

Let’s find out what she is doing now.

Daisy de ha Hoya has completely disappeared from the eyes of the media. She is nowhere to be seen.

Daisy's Twitter handle has been inactive since 2009, while her Facebook account has been inactive since 2010. Daisy does have an Instagram account now, but her account is private. By looking at her bio, we can be sure that she is still in the entertainment industry but behind the camera. She also has mentioned her being a mother of a puppy. Because of her privacy, we don’t know how Daisy is spending her life now.

Whether that be her personal life or her professional life, there is no update on what she is actually doing.

However, Daisy was once addicted to drugs, but she now appears to be on the mend after entering treatment. She started focusing on her music career as a singer and songwriter of a rock band, Black Star Electra. Her band also doesn't appear to be uploading any videos at the moment.  We are pretty sure she loves to stay low from the hustle of the media.

However, in an interview in 2016, she shared about being sober for some years and trying to repair her relationship with her mother.

Even though she had a good career, she never experienced a happy family.

Daisy de la Hoya, now age 38, was born as Vanessa Mossman in 1983. A native of California, she is the niece of the champion boxer Oscar de la Hoya.

The Text actress's parents' divorced when she was three years of age. She had a rough childhood and never knew who his father was until she turned 12 years old. After that, she didn’t want a father in her life. She left her mother when she turned 20 and started her own journey. Admittedly, she doesn't share a close-knit bond with either of her parents.

Daisy found out she is related to the champion boxer Oscar de la Hoya when her aunt contacted her after going to a show named Rock of Life. Her aunt was a huge fan of the show. The show gave her the chance to reunite with her family.

With the help of the show, not only did she get reunited with her family, but also it became a turning point in her life.

Daisy started her musical career in the summer of 2003. She backed vocals for Seraphim Shocks's full-length album, Halloween Sex N Vegas. She was also part of the band's tour playing as a bassist. Throughout 2006 she was with the Seraphim Shock, touring and performing live.

After a year, she released her first single, Heartbreak, followed by Pretty Messed Up in 2008.

Then, she released a video of herself playing acoustic guitar and singing the song Rock and Roll Monkey, which landed her the opportunity to be part of the reality show Rock of Love 2. This was a major breakthrough in her career.

Out of 20 contestants, Daisy de la Hoya became the show's runner-up while Ambre Lake won the competition. After this, she even got a new name, Daisy Rock of Love star.

In Daisy of Love, she found someone who she fell madly in love with.

In the last episode of Daisy of Love, Daisy chooses London as her partner. But, their relationship doesn’t go as she expected. According to the reports, Daisy shared that she and London are not together anymore.

There were many reasons for their break up, but one of the main reasons was that London cheated on her and got another woman pregnant. Daisy even accused London of using her because of her fame and making himself more popular. She admitted that she fell hard in love with London and tried her best to make their relationship work. But, London broke her heart, and it was getting difficult for her to move on.

But love found Daisy’s way. A year after VH1 aired Daisy of Love, Daisy de la Hoya crossed paths with Corey Haim. The connection was instantaneous, and soon they began seeing each other in a romantic light.

As both had a history of addiction, she found a kindred spirit in the Canadian actor. Admittedly, Daisy even wanted to help her boyfriend, Corey, overcome his loneliness.

But before the lovebirds' dating could go any further, tragedy struck. On 10th March 2010, Corey took his last breath at his Burnbank home in California. Contrary to the reports linking his death to drug overdose, doctors cited pneumonia as the cause of his demise.

Responding to the news of Corey's passing, Daisy commented that she would've liked a better ending between the two. Because of her battle with substance abuse, Daisy couldn't hold on to a specific boyfriend for much longer. Needless to say that Corey's passing took a heavy toll on her.

Daisy’s drug addiction worsened with her stints as a reality star. But she realized and got clean up in 2016.

Working on the film 51 the Movie, the former Daisy of Love star now holds a net worth of $250 thousand.

Daisy hasn't been heard from in a long time. No one knows if she has found someone with whom she is now happy. We don’t know if she has any children now.  Despite the fact that we know very little about her, we hope she is now living a quiet and happy life.