By LRU Writer | On: June 09, 2019
Princess Leia has given love a tryout in real life away from the fame! The British actress, Daisy Ridley has already the never-ending love from her fans but she weaves own romance besides it. The Star Wars star has her name tagged along with two high-profile actors. Wondering Daisy's dating timeline? 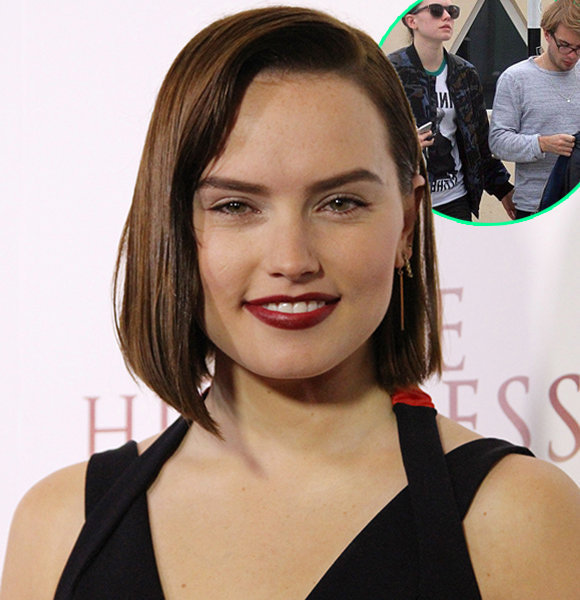 Princess Leia gave love a tryout in real life away from the fame!

The British actress, Daisy Ridley already possessed the never-ending love from her fans but still managed to weave another one of a personal nature. Before her engagement, the Star Wars star had her name tagged along with two men: a high-profile actor and a mystery man.

Daisy, age 27, was previously rumored to be dating fellow British actor, Charlie Hamblett. The couple buzzed the media with their dating rumor at the back end of 2014.

She and Charlie were first spotted together sharing 2015's New Year's Eve moments. The rumored lovebirds marked the beginning of their romance by welcoming the New Year of 2015. However, the pair, who prefers to stay notoriously silent regarding their relationship, hardly made any appearances that year.

But at the end of 2015, Telegraph posted an article claiming Ridley was already engaged to Charlie. As both made no official comments regarding their engagement, the news got still viewed as the rumor in the media.

Later in 2016, they again came forth with their romance appearing together on multiple occasions while still dodging off the engagement rumors.

Adding to it, she was seen sharing pictures with Charlie on her Instagram. On 4th January 2016, Daisy posted a photo of her with Charlie making funny faces while having her arms wrapped around above his shoulder. Likewise, in Januray 2016, Daisy was spotted strolling on the streets of Hampstead with her boyfriend, Charlie. At that time, She was seen caressing her beau's bottom while the pair was crossing the street. They sure must have been very close.

But, the couple's romance soon began fading from media, being their last appearance a month later in February 2016. During their penultimate outing, Daisy had appeared with Charlie in London's Soho area in their casual outfits.

Since their last public appearance, the duo's romance fizzled out as they parted their ways silently.

At the end of 2017, the Star Wars actress shared some hand-holding moments with the man whose identity is still a mystery.

Daisy also got rumored to be dating one of her co-stars Tom Bateman back in November 2017 and got close to Tom while filming the movie, Murder in Orient Express.

The pair first met on the set of Sir Kenneth Branagh’s adaptation of the Agatha Christie novel. The rumors of them together romantically first flew around in the media when Hollywood producer Judy Hofflund let her lip slip during a red carpet at the film's premiere at London's Royal Albert Hall. Judy said,

“Something kinda happened with Tom and Daisy... but that’s public news, right? I should keep my mouth shut.”

When Tom got confronted on the topic, he denied giving any comments on the subject. He said,

“I’m absolutely not going anywhere near that! But nice try.”

Later, when he was pushed to speak on whether the rumor was true, Tom attempted to ignore the question and claimed that the producers just liked to 'create a buzz' sometimes. He said,

“They like to create a buzz, they’ve got to otherwise no-one will come and see the movie!”

Well, they did seem cute together as the couple!

As for Daisy, she was previously in an interview whether she was dating with anyone in October 2017, she refused to answer the question. She said,

However, the gorgeous actress once revealed that the late American actress, Carrie Fisher, provided her some dating advice by stating her stardom would be a hindrance for her dating life. She said,

"It's hard to date once you're a Star Wars star because you don't want to give people the ability to say, "I had sex with Princess Leia"."

Well, she does love staying lip-tight regarding her romantic relationship.

Daisy and Tom continued to deny the romance well into the year 2019 until engagement rumors spiked media's interest on the pair.

In June 2018, the Chaos Walking actress stepped out with a diamond on her left ring finger at the All Points East Festival. She and her now-alleged fiance Tom were within each other's grasp throughout the event. Sources close to the Vanity Fair actor claimed that during the trip to America earlier that month, he introduced to staff at a Chicago hairdresser parlor as his fiancee.

Back in February 2019, the rumored-engaged duo - who fell for each other on the set - took their relationship to the next level by moving into an expensive apartment situated in London's Primrose Hill.

Despite the gossips surrounding their relationship, neither Daily nor Tom came forth confirming the news.