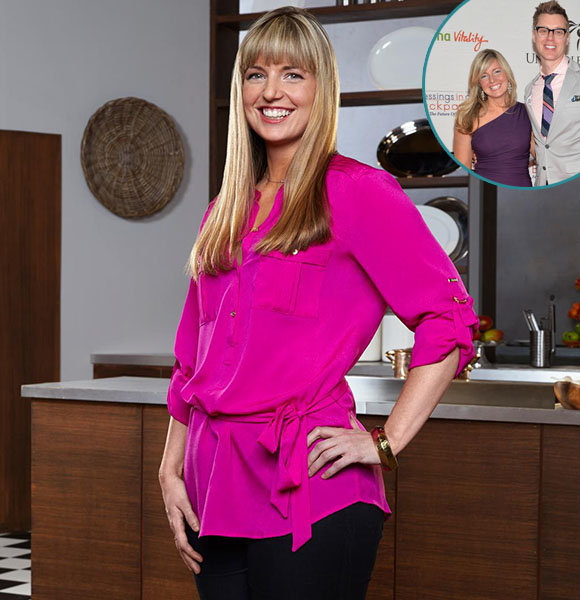 Every married couple has to go through numerous questions regarding extending their family. Similar is the situation for celebrity chef Damaris Phillips and her husband, who have constantly asked about having kids.

But now, it seems they will soon welcome someone into their family. Is Damaris Phillips pregnant?

As much as Damaris's pregnancy is the talk of the town, we can say the same for her wedding. Who is Damaris Phillips married to?

Let's take a deeper look into her married life.

Most little girls grow up fantasizing about having a dream wedding. However, it was not for Damaris.

Before accepting the engagement ring from her then-boyfriend, Darrick Wood, Damaris, who originally won the winner of season nine of Food Network Star, hadn't given much thought to the type of wedding she would desire.

But when the time came, the Jefferson Community and Technical College Alum rose to the occasion, and with a little help from her husband, she managed to throw one of the most epic wedding parties of the year.

For a sacred ceremony like a wedding, some may prefer an intimate ceremony enclosed in a tight-knit surrounding made up of close family and friends.

Contrary to that, Damaris and her husband, Darrick, are more of a 'the more, the merrier type' as evidenced by the fact that 235 people attended their wedding celebration in 2015. Damaris and her husband, Darrick, share an affectionate kiss on the day of their wedding. (Photo: Food Network)

After soaking up the post-proposal bliss for a night, the Southern & Hungry star and her husband, Darrick, got right down to preparing for the wedding.

Darrick had second thoughts about his then-to-be wife's ability to organize a wedding that would be remembered for its extravagance.

In a 2017 Food Network interview, she recalled the moment of being faced with doubt after accepting Darrick's engagement ring and said:

"I was like, 'What are you thinking about the wedding?'"

As part of their wedding plan, the Kentucky native and her then-fiance, Darrick, each jotted down three wedding wish lists.

Damaris wished for an outdoor wedding, a parade-style procession, and furniture with ill-assorted vintage china, whereas Darrick wanted family-like dining and the only furniture to accompany all the guests and a fork from each guest for the newly-weds to keep.

The newlywed's contrast in their respective wish list culminated in a wedding reception in the middle of a city street with a non-identical place setting for each guest and an all-vegan menu. And for the adorable couple, a 10-cake dessert buffet was exclusively baked as per their demand.

The 41-year-old celebrity chef had, by no means, kept the spoils of the ceremony to herself and her husband.

Damaris and Darrick's wedding reception might have all the making of a dreamy affair, but for the former Food Network Star winner, the fact that she was marrying Darrick was dreamy enough. In the same Food Network interview, she said,

"I was so excited to marry Darrick, I would have gone to the courthouse, But this was more fun — and a lot prettier."

Almost three years after the momentous occasion that was their wedding, the pair were in a celebratory mood once again as they announced that the Wood-Phillips family was making an addition to their family.

Did Damaris Phillips Have a baby? The answer is no.

However, she did gain a lot of media attention when her fans mistook her cat's pregnancy for her own

In March 2018, the Kentucky native took to Instagram to break the news of Florence's pregnancy. The lengthy post, which also featured a picture of Florence, read,

"Florence update- still pregnant and LOVING her kitty bed. Everyone's advice has been so helpful. We have a few options that she may like for delivering the kittens, boxes, dog beds with a baby blanket, covered corners with kitty beds, but for now she is all about her kitty cave. She is eating, drinking, using her litter box and most importantly tonight she let us brush her."

Florence is a pet cat owned by Damaris and Darrick. Interestingly enough, Damaris's bio suggests that the duo has yet to conceive a child of their own.

Between Damaris's TV gigs and her husband's frequent trips abroad as an education consultant, likely, the couple hasn't had the proper time to start a family.

They have recently celebrated their 7th marriage anniversary. Maybe they are trying to get pregnant and waiting for the right moment to announce it.

Should the Southern & Hungry star get pregnant - judging by the magnitude of the pair's wedding ceremony - you'd think there won't be a shortage of epic celebrations.

Stay tuned to get more updates on Damaris Phillips.