By LRU Writer | On: January 14, 2020
Dani Dyer is an actress and TV reality star...She won love Island in...She is the daughter of famous actor...She is currently dating... Her boyfriend is... and they engaged...Her ex-boyfriend Jack Fincham..... the two split because of... The actress was born on ... and her height extends to... Net worth... 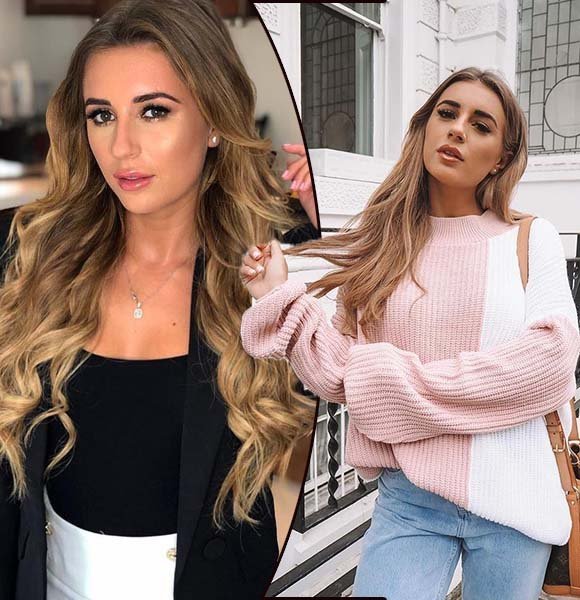 British actress and reality TV personality, Dani Dyer, made her debut in 2006 with a British romantic comedy movie The Other Half. She then appeared in Doghouse (2009) - a British slapstick comedy horror splatter film. In 2018, Dani won the fourth season of Love Island.

In September 2019, the reality TV star hinted at being engaged with her current boyfriend, Sammy Kimmence; she posted a mirror selfie on her Instagram, flaunting an enormous diamond ring on her finger. Further, her boyfriend Sammy also commented on her photo by saying,

"Is that an engagement ring???"

Despite hinting at the engagement, Dani and her boyfriend have not officially confirmed it yet.

The actress is in an on-and-off relationship with boyfriend Sammy Kimmence- a stockbroker from Essex, for a long time now. Their relationship history date back to their teenage years. Dani and Sammy dated when as teenagers but later split due to certain differences.

Further, in the show Love Island, the actress referred to Sammy as a cheater and said revealed that she found it hard to let her guard down while dating Sammy.

In spite of their relationship trouble, Dani and Sammy found their way back to each other and got back in April 2019. The two were seen kissing one another in the middle of a Chelsea street in London.

Dani dated Jack Fincham on the TV reality show Love Island (2018). They were paired together on the show, and the two even won the show with full glory in 2018.

The ex-couple stayed together for nearly a year before parting their ways in March 2019. In April 2019, Jack confirmed their break up with an Instagram post that said,

'There is no easy way to say this and it isn't going to be an easy time but me an Dani are not in a relationship anymore'.

After her split with Jack, Dani started dating her Sammy.