By LRU Writer | On: August 04, 2019
Dianna Agron is most famous for...Sharing her views towards the concept of...The couple - who initially started dating each other in...family consists of...estimated net worth is...While professionally a... 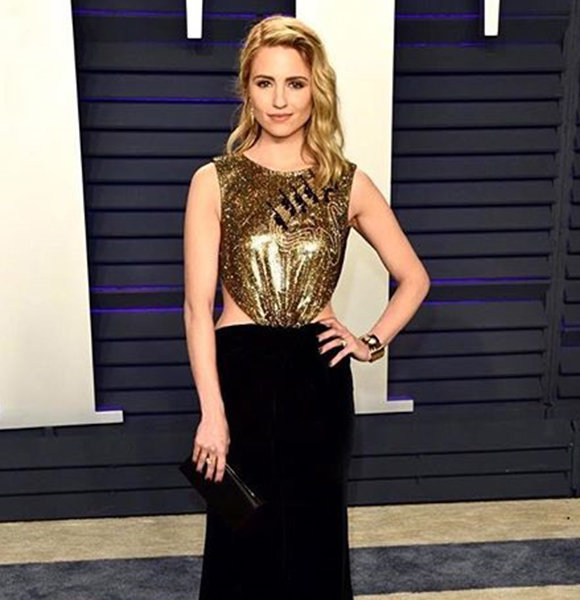 American actress-singer-dancer Dianna Agron won the hearts of the audience with her role as Quinn Fabray on the musical series, Glee.

Throughout her career Dianna has appeared on numerous television and movies including the likes of CSI: NY, Numb3rs, Veronica Mars, Heroes, and I Am Number Four. Her work on Glee also won her a Breakthrough Of The Year Award in 2010.

Dianna's portrayal of the character Belle Blake in The Family also recieved quite the attention. Sharing the screen with big names like Robert De Niro, Tommy Lee Jones, and Michelle Pfeiffer, her performance was praised by the viewers and critics alike.

Over the years, many questions regarding her sexuality have risen, and to answer them all, she is not gay. While she supports the LGBTQ community wholeheartedly, being a supporter does not necessarily make her a gay woman.

Sharing her views towards the concept of mixed sexuality, Dianna celebrated the Gay and Lesbian Pride Month in the US in 2019. While she did wear a T-shirt with the word 'Like Girls,' it was only to show her love and respect toward the LGBTQ community.

Supporting the fact that she is not gay, Dianna has been married to her husband, Mumford & Sons guitarist Winston Marshall, for a few years now. The couple initially started dating each other in July 2015 and got engaged six months later in December. The destination wedding took place in Morocco on 15 October 2016. Wearing a Valentino wedding dress and a stunning diamond ring, Dianna looked gorgeous in the arms of her husband.

Although the married duo is yet to start a family of their own, Dianna and her husband are very content with their marriage as of 2019.

The 33-year old's family consists of father Ronald S. Agron, mother Mary Agron, and a younger brother named Jason Agron. She was conceived on the 30th of April 1986 in Savannah, Georgia.

However, due to her father's job as a general manager at the Hyatt hotels, Dianna was raised in parts of San Antonio, Texas and San Fransisco.

The actress initially went to a Hebrew School but later attended the Burlingame Intermediate School and recieved her high school education at the same institution. While in high school she took part in plays, portraying the role of  Marty in Grease and Dorothy Gale in The Wizard of Oz.

Soon after her graduation, the 5 feet 5 inches (1.66m) lady moved to Los Angeles. With intent to pursue a career in acting, she landed a small-time role in a TV film called After Midnight: Life in Bars in 2006.

Dianna's early life was quite peaceful, but when she reached the age of 15, her father was diagnosed with Multiple Sclerosis. The disease eventually took its toll, and her parents got separated.

Dianna's estimated net worth is $4 million. However, with a blistering career as an actor, there were no doubts regarding her success in the Hollywood industry.

The actress, who started dancing at the early age of three, also taught dance as a teenager. However, her love for acting eventually took over, and Dianna left her dancing career behind.