By LRU Writer | On: February 01, 2019
long with her appearance on the camera, Emily holds a creative mind: she writes and co-produces Pop TV original, Hot Date...Interestingly, she stars in the show alongside Brian Murphy. The chemistry between her and her partner is so acceptable that it seems like there's more between them than what meets the eye... 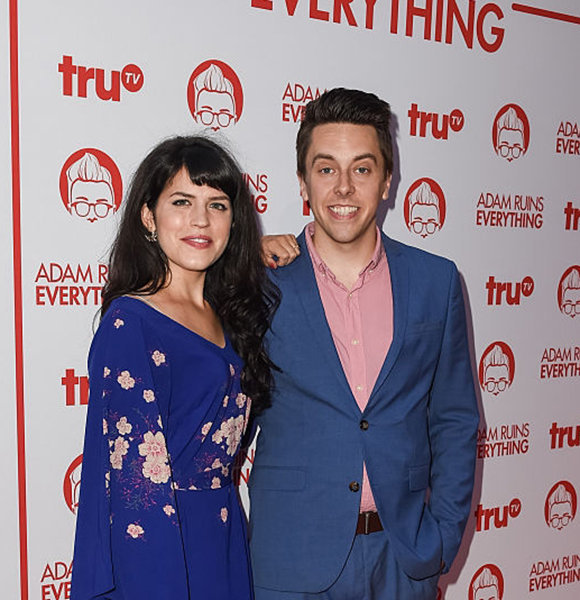 American actress, Emily Axford is known for her role on TruTV Comedy original Adam Ruins Everything. Along with her appearance on the camera, Emily holds a creative mind: she writes and co-produces Pop TV original, Hot Date.

Interestingly, she stars in the show alongside Brian Murphy. The chemistry between her and her partner is so acceptable that it seems like there's more between them than what meets the eye.

So, is there any relationship between the two? Are they linked? Find out all the answers along with additional information on her bio, net worth, and TV shows!

WELL! It may be a bombshell for many, but, yes! Emily Axford and Brian Murphy are married. It's indeed confusing as Emily still uses her second name as still Axford. However, the fact the two have walked the aisle together can't be overlooked.

Admittedly, Emily and Brian have been together for years; dating shortly after they crossed each other's path while working for the website, CollegeHumor. They actually met when Emily went to a voice audition for a show, Dinosaur Office.

Though there were no hangouts and talking till a month, they started working together in late 2012. While they shared creative ideas for writing and doing videos together, they eventually ended having feelings for each other. And, soon their dating flourished as their creativity. After dating for a while, the happy couple decided to exchange the wedding vows. On 20 September 2014, Emily and Brian tied the nuptial knot at a wedding ceremony held in West Hollywood amid close friends and family.

Equally Loving Couple:- Who Is Hugh Jackman Wife & How Many Children They Have? All Family Detail

In 2018, the married pair celebrated their four years of togetherness as husband and wife. And, their relationship is indeed going on smoothly.

The Dorkly Originals star has made quite a name for herself. Even at this competitive age, she succeeded in reaching a prominent height of success.

Emily, who celebrates her birthday every 26th July, has some TV shows credit under her name. She even has writing credits for various series such as Jest Originals, Sketchy, CollegeHumor Originals and few more.

Her work and the field of creativity has honored her with both fame and net worth. She earns an estimated salary of $72,600 while collaborating with her husband. Probably, the connection and the support for each other has made the work easier for both the duo.