Who Is Hugh Jackman Wife & How Many Children They Have? All Family Detail

By LRU Writer | On: January 29, 2019
Hugh Jackman, known for his various roles in the movies and tv shows, is a family man. Hugh shares years-long romance with his wife...Hugh has been married to his actress...they have been together for...since they met back in...the duo crossed path at...in...eventually the couple started dating and after...they exchanged the wedding vows in...they now share... 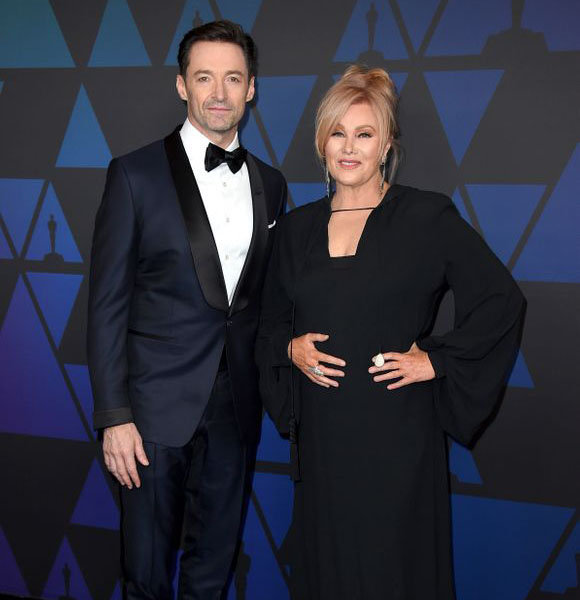 It is no surprise to find the names of A-list Hollywood stars tagged along with gay rumors. Just like any other high-profile celebrity, Hugh Jackman, famously known for his role as Wolverine in the X-Men series, was once rumored to be a gay.

But showering love on his wife of decades and children, Hugh dodged all the gay rumors. Indeed, Hugh is happily married to his partner for life. Unlike many Hollywood couples, the relationship between Hugh and his wife has set the relationships goal high. Even after years, the duo is perfectly content in each other's company.

Curious to know how Hugh's lucky lady? Join in the article below!

Over Two Decades Of Married Life With Actress Wife

The Greatest Showman star, like his role of a committed family man in the movie, is a loving husband in real. He shares decades-long romance and a beautiful family with his supportive wife.

His wife, Australian actress, Deborra-Lee Furness also yields interest in acting: she has her credits on movies and TV shows such as Corelli, Legend of the guardian and so on.

You May Also Like:- Daniel Henney Thoughts On Getting Married, Ideal Wife & Dating Talks

Since crossing each other's path on the sets of the TV show "Corelli" which had its shooting in Australia in 1995, Hugh and Deborra have been together for over two decades. Even though the daughter of Fay Duncan wasn't looking forward to dating anyone or any of the co-stars back then, she couldn't resist falling in love with Hugh's charm. For best, the couple eventually began dating.

After being in a serious relationship for 11 months, Hugh and Deborra exchanged their wedding vows in 1996. Since then, the pair has been carrying their married relationship with love and affection. But, it is not that their marital voyage only faced the smooth. Like any relationship, the pair had their hurdles. And, they were almost at the position to part ways. Nevertheless, their love for each other brought them back together.

Family Of Four With Children

With their awing romance, Hugh and Deborra at the age of 50 and 63 respectively (despite the 13 years of age difference) are not only perfect partners for each other but, also are proud parents to their two children. They together share two kids - 18-year-old son Oscar Maximilian Jackman and 12-year-old daughter Ava Eliot Jackman.

Unbeknownst to many, their two kids - of mixed ethnicity - are adopted. Before the pair took in their first child, Deborra had undergone two miscarriages: the couple had initially planned to have one biological child of their own and then adopt other children to build their family.

But as if the fate wanted the otherwise - after the miscarriages, the duo adopted the children. Since the addition of Oscar and Ava in their life, they now share a family of four while relishing their fat net worth.

With acting stints on magnanimous TV shows and movies, Hugh has a net worth of $150 million. Despite the fame and fortune, Hugh keeps a healthy balance between his family and work life.

The reason behind the perfect balance is Hugh's secret pact with his wife; according to which, the pair makes sure to speak to each other before making big decisions that could impact their family in any way.