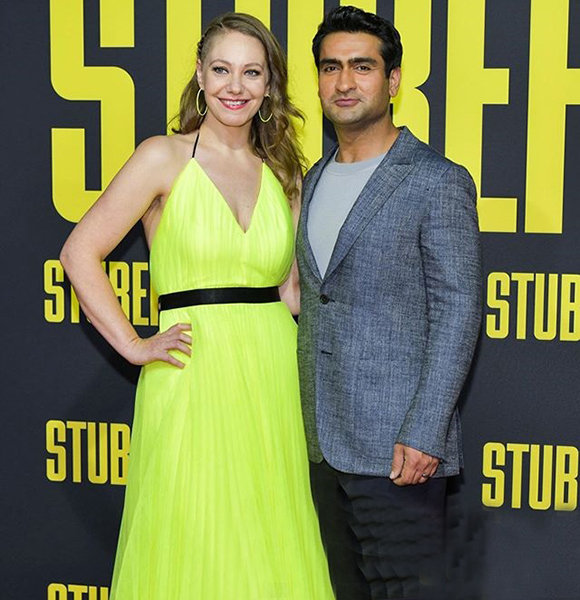 Emily V. Gordon is an American producer, writer and podcast host who turned her love story into a successful rom-com movie The Big Sick in 2017. The movie was a hit that became one of the most critically acclaimed films of 2017 and it also did commercially well at the box office.

However, before her debut as a producer-writer, Emily worked as a therapist for six years from 2004 to 2009. Read on to know more about this therapist turned writer wife of Kumail Nanjiani in detail.

The writer was born as Emily Vance Gordon on 3 May 1979 in Winston-Salem, North Carolina, USA. Her father is Terry Gordon and her mother is Beth Gordon.

This Might Interest You:- How Old Is Nick Vallelonga? Wiki & Family Details Of Green Book's Writer

Talking about her education, she is a degree holder in B.A. Psychology from the University of North Carolina which is at Greensboro. She also did her MS/EdS in couples and family counseling from the same university.

Further, she practiced as a therapist from 2004 in North Carolina and moved to Chicago, Illinois in 2005. She again relocated to New York in 2007 to try and make it as a writer. After gaining success in the field of writing in New York, she moved for the last time, this time to Los Angeles in 2010.

It is no secret that Emily is happily married to Kumail Nanjiani, a Pakistani-American stand-up comedian and actor since 2007. The pair first met in 2006 at a stand-up set at Chicago’s Lincoln Lodge and started dating but they had to keep their relationship a secret because of Kumail's parents who wanted him to marry a Pakistani girl. However, Emily and Kumail broke up after dating for eight months due to her illness.

Emily was diagnosed with adult-onset Still's disease (AOSD) which at that time was not exactly known what it was. She had to be put into a medically induced coma for the treatment and meanwhile, But it was Emily's same life-threating disease that pulled them back together as Kumail realized his love for her and finally had the courage to tell about her to his parents.

You May Also Like:- Who Is Kumail Nanjiani Wife & How Much Is The Eternas' Actor Net Worth?

As soon as she was well enough, the couple tied the knot in a secret courthouse wedding in Chicago on 14 July 2007. They also wedded in a traditional Muslim-Pakistani fashion, two weeks after their courthouse marriage, which was a three-day-long celebration and was arranged by Kumail's parents.

However, they didn't announce their wedding and kept a hush about it for a few years. After some years, they kept a reception at a bar in New York to announce the news of their marriage.