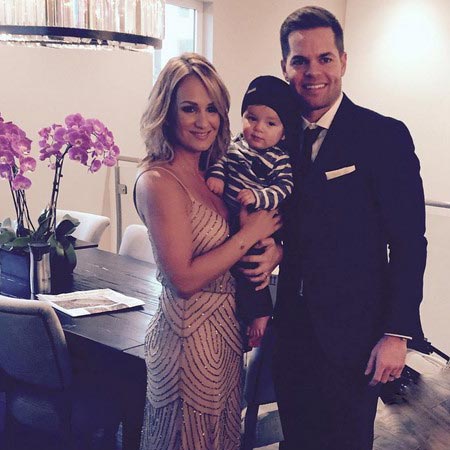 Struggle leads to the path of success, if you work hard on the something with a passion, then, you will be favored by the positive results. Let me introduce one person who was grant with two-time Emmy award & well known as a sports broadcaster, Jenn Brown. Beauty with success, we have exciting stories about her life activities.

Jenn Brown is the first female correspondent for ‘inside the NFL’ & can be seen hosting UFC and boxing. She is a female sportscaster/sideline reporter, like Samantha Ponder, Charissa Thompson, Erin Andrews and Heidi Watney.

Being a passionate lady since childhood on sports, she never got fired from her job due to her remarkable work dedication. Apart, her personal life is also going so well.

Brown was dating Wes Chatham since 2007 and later got married in April 2012. Her husband has played many games but famously known for the role of an actor in Chatham, Hunger Games: Mocking Jay Part 2. Their life went so well, as both couples are busy with their professional career, they have never been into any affairs that lead to question their relation. In Overall, these couples married life gone very well.

They have created a sweet family after welcoming their first child, John Nash, back on 2014. Well on 2015, Jenn was pregnant again. She said celebritybabies.people.com that

“I’m hearing such wonderful stories about siblings that are as close in age as ours will be, and we look forward to the challenges, too! We can’t wait to find out if it’s a boy or girl.”

Jenn is active in social networking profiles, and she loves to express and share her daily activities. We have found some of the stories that are very exciting for you.

Jenn at her 2nd Pregnancy:

On June 2016 they have welcomed their second baby boy.

The beautiful photos were out of social media and these couples looked jubilant.

Jenn tweeted about her 2nd baby:

Jenn's Husband, Mr. Chathman was so proud of her:

I'm a couple days late but had to share this little nuggets 1/2 birthday. I can't believe he's already 6 months old. He really is the happiest baby. Every morning I'm greeted by those big brown eyes and dimples, as he kicks his legs in joy. He can almost sit up by himself, loves bananas, sweet potatoes and avocado and is fascinated by his big brother. Nash has been great with Rhett but sometimes feels he has to put him in line with a "no Bubba no" when a favorite toy is grabbed. I've been trying to explain to Nash that there's a good chance his Bubba is going to be bigger than him ( they both wear the same size diaper ????) so he should probably be nice! We went for his 6 month check up and he weighs 20.5lbs and is 28" tall (she checked him 4 times) and was informed he's in the 99th percentile. Maybe the nickname Bubba is going to stick! #RhettChatham

Jenn Brown and her husband reside in Los Angeles.

Born and raised in Orlando, and attended the University of Florida. Jenn Brown was always passionate about the sports from her small. She worked at NFL network as reporter and host for two years, NBC as a co-host on collegiate nationals  & ESPN for at least three years as a sideline reporter, LA reporter for interviews.

Jenn had also worked for As a sports broadcaster, she won a two Emmy Award and recently on 2009, she sidelined the megahit show ‘American Ninja Warrior’. On 2013, she was ranked as Top 4 hottest female’s sports anchor by mensxp.com. At this mom age, she knew herself and managed to look sexy and beautiful.