Flavor Flav Is Getting the Sweet Taste Out of Married Life? 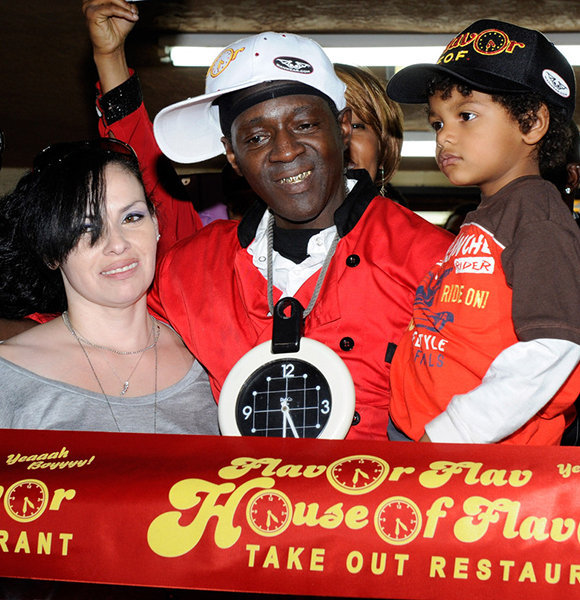 The strength of a relationship is examined at the time of difficulty, but only a few emerge stronger, while others hit the dust!

Famous rapper and American musician Flavor Flav can explain that to you better, as his relationship with his wife hit a rocky road too.

But, their relationship was strong enough to withstand the troubles, and today the couple enjoys thirteen years-long relationship.

Let's take a stroll in his life as he enjoys a laid-back life with his wife and kid while we address the past troubles of their relationship.

Flavor Flav’s Life with His Wife

The American musician got engaged to Liz Trujillo back in 2008.

The Public Enemy rapper kept his personal life away from the media for a while, but he shared a few details of his married life when he appeared on Steve Harvey’s talk show back in May 2016.

But, the musician and his wife now seem to have broken off and officially called it quits. However, this sometimes sweet, sometimes salty relationship has its own tale.

While Flavor maintained a low-key life, fans were uncertain about his relationship with his wife, Liz Trujillo.

Thus, a while ago, he shared that he and his wife are still together and gave an insight into his married life.

In an interview in May 2016, the American musician revealed the information saying,

Flavor and his wife enjoy marital bliss now, but the couple went through a rough patch in the past. The couple appeared on the VH1 show 'Couple’s Therapy' in 2013 when they were still engaged.

In the show, Liz confessed that the lowest point in their relationship was the incident when she discovered that the American Musician had signed the contract for a dating show without her knowledge.

In an interview in June 2013, Flavor's ex-wife revealed how she found out about Flavor's new show, stating,

We were already together for eight months in a committed relationship, and we’re in a deli and the guy is like ‘Congratulations Flav, on your new show and finding true love and dating 25 beautiful women.’ I looked at him and I was like ‘A new show, what? Huh? Finding your true love? I don’t understand.

In April 2013, Flavor Flav's fiancee, Liz Trujillo, collapsed during the filming of 'Couples Therapy' and was hospitalized after ODing on painkillers.

The incident was initially claimed to be an accidental overdose, but Flavor's spokesperson denied it by quoting, "The claim of an overdose, or any involvement of drugs, could not be further from the truth."

Another dent occurred in the duo's relationship when Flavor chased his then-fiancee, Liz's son, Karma, with a kitchen knife at Flavor’s Las Vegas home in October 2012.

In 2000, he lived in the cramped Bronx apartment of his then-girlfriend, Beverly Johnson (along with her two kids from a previous relationship), in a rough area near Yankee Stadium.

The American musician admitted that he threatened him, for which he would have been put behind bars for 12 years on the felony assault charges, but the court reduced it to misdemeanor offenses at the last minute as Flav reconciled with his family, as per reports on April 2014.

He was sentenced to probation and four months of domestic violence counseling by the Clark County District Court. Despite experiencing bitter incidents in the past, the couple has emerged victorious and are still going strong as a couple.

Previously Flav was married to Karen Ross, with whom he shares his first three children. Following the marriage, Flave got married to his second wife, Angie Parker.

Further, he shares his youngest son Karma with his wife, Liz Trujillo, making Flavor the father of seven kids.

In 2000, Flavor also dated the American model Beverly Johnson and lived with her and two kids from his previous relationship in the cramped Bronx apartment.

The apartment was situated in a rough area near Yankee Stadium.

In his colorful dating life, the American musician had quite many girlfriends.

For many, when a relationship turns sour, they don't rekindle their relationship. In such cases, meeting them in real life can be awkward. Well, that can be a whole lot of awkward.

Flavor felt the same way when he had an encounter with his ex-fling.

The ex-fling in question is Tiffany “New York” Pollard. Tiffany and Flavour had a fling during the VH1 reality dating show 'Flavor of Love.' But, he broke her heart when he chose Nicole “Hoopz” Alexander over Tiffany.

After six whole years from the heartbreaking moment, the exes reunited for an episode of 'Braxton Family Values' in 2018.

Having moved on from each other, the pair didn’t indulge in a fight.

Instead, Flavor and his ex took part in an intimate conversation over a whiskey. It was a nice gesture on both of their parts as they didn’t let their past tarnish the moment and enjoyed a friendly catching-up.

Regardless of his rocky love life, the artist now enjoys life with an impressive net worth of 2 million dollars, per Celebrity Net Worth.