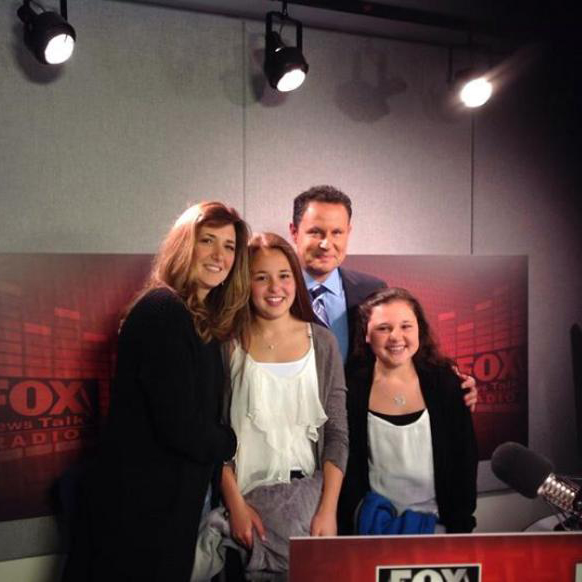 Brian Kilmeade, the host of the Fox News talk show 'Kilmeade and Friends', has lived a beautiful married life. A father to three children is considered a great father and a wonderful husband by his wife and children.

He hasn't disclosed a lot of information about his private life but let's list out all we know about him and his family one by one, including his controversial remarks.

Brian has made it clear that he keeps his career and his family life separate with a strict boundary while making sure to have time for his wife and children. Brian With His Wife and Children (Photo: foxnews.com)

There is no proper citation on when Brian married his wife Dawn Kilmeade, but sources suggest that they were married in 1993, and all indications suggest that Brian's wife Dawn is the 'only one' for him. What stood out the most for his well-wishers was how he came off as the same person he appears to be on television; an active, humorous man that loves his sports (especially soccer which he played during his college years) and holds the notion of live life to its fullest.

The Roman Catholic author is dedicated to his wife, and not a single rumor about an affair or a divorce has surfaced all these years.

Although Brian chose to keep his private life a secret, an intimate detail of his decades-long marriage ceremony came out in the open. The feature in question was that his wedding song was The Power of Love by Huey Lewis & The News.

People rejoiced when they got to know about the intimate details of the much-loved host's big day. Apart from a successful family, the anchor has very talented children.

The TV anchor has three children with his wife, one son named Bryan, and two daughters named Kirstyn and Kaitlyn. His children seem to love him as much as he loves them.

Well, Brian's firstborn graduated from Syracuse University with a degree in sports management in 2018. Interestingly, Bryan did his minors in Sports Analytics and Economics. Pursuing his passion for Sports Analytics, player personnel, and salary cap management, he started his job at XFL as football operations coordinator in October 2018.

Besides the American anchor's son, his youngest daughter is also a talented lady. She has an interest in musical theater and became part of Body Language Dance Studio.

When we talk about Brian, a very asked topic comes up which is about his "controversial humorous comments."

Although he has quite a comical demeanor, Brian has had a history of inappropriate jokes and comments.

Explore:- Controversial Chris Broussard Has A Wife Who Is Top Of Her Feild And Often Praises Her

Some of them include "You grew up on tacos, correct?" (a racist joke towards a Nicaraguan meteorologist), "Not all Muslims are terrorists, but all terrorists are Muslim" (a self-explanatory jab at Muslims during a 9/11 discussion), "We keep marrying other species and other ethnics" ( a comment he made relating Inter-race marriages and increased tendencies of having Alzheimer's) and a few other comments.

Although not insulting, there is a video of Brian accidentally hitting a two-year-old kid in the face with a basketball.

Nevertheless, apart from his comments, Brian has a successful line of work surrounding him.

Brian Kilmeade was born on 7 May 1964 and is a Long Island, New York native, where he still resides. He graduated from C.W. Post Campus of Long Island University in 1986 with a bachelor's degree in Arts. He started his journalism career as a correspondent on Channel News and eventually grabbed a job of Anchor for KHSC-TV in California.

Standing at the height of 5' 9'' feet and at the age of 57, Kilmeade formerly worked as a UFC announcer, a feature reporter/anchor for Newport TV, and a sideline reporter for the MSG network, therefore, solidifying his foundation as a Sports Journalist.

The New York City native has worked in media for quite some time and is recognized quite well by most News enthusiasts. He is renowned for his work as the anchor of the show named after him 'Kilmeade and Friends' as well as the co-host of Fox's morning show 'Fox and Friends' alongside Steve Doocy and Ainsley Earhardt. Also hosting the Fox News Radio program The Brian Kilmeade Show, which is also available as a podcast.

His biography suggests that he has ten years of experience as a stand-up comedian, which stands as a basis for his humorous antics and comments on his shows.

Brian is also a New York best-seller author and has written five books. Four of those (It's How You Play the Game, The Games Do Count: America's Best and Brightest on the Power of Sports, Thomas Jefferson and the Tripoli Pirates, and George Washington's Secret Six) were best-sellers.

Looking at his success, the anchor has a raving net worth of $10 Million and enjoys a salary of $4 Million, adding up to his wealthy net worth.