By LRU Writer | On: July 26, 2019
Gaten Matarazzo is a...heart got stolen by girlfriend...celebrated their very first anniversary on...grew up with his parents, and... has managed to accumulate a net worth of... 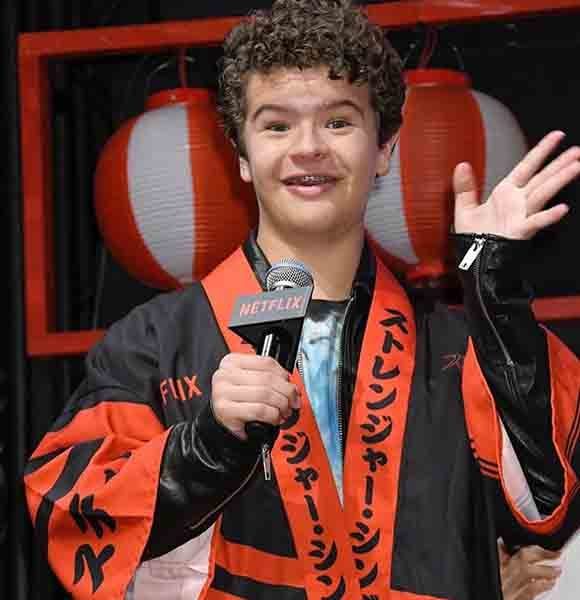 American child actor Gaten Matarazzo is best known for the portrayal of Dustin Henderson in the Netflix original series Stranger Things. At the young age of 16, he has already appeared on the hit series The Blacklist and Katy Perry's famous song Swish Swish.

Today, know about his girlfriend, parents, ethnicity, net worth, age, height, and more!

Gaten, with his adorable smile, won the hearts of millions of viewers. However, his heart got stolen by his girlfriend, Lizzy Yu since March 2018.

Sharing the love for her through social media, Gaten takes every opportunity to shower his girlfriend Lizzy with respect and admiration. From his Instagram, the couple looks genuinely in love. They even celebrated their very first anniversary on 4 March 2019. Apart from his girlfriend in real life, he is also indulged in some on-screen romance. His character Dustin got linked with girlfriend Suzie in the third season of Stranger Things.

A native of New Jersey, USA, Gaten was born on 8 September 2002. He was named after his father Gaten Matarazzo Sr. The budding actor comes from very mixed family background. He boasts Italian, English, Finnish and Scottish ethnicity.

He grew up with his parents, and siblings Carmen Matarazzo and Sabrina Matarazzo.

Supportive of her children's career path, his mother Heather Matarazoo made trips from New Jersey to New York City for her son's broadway performances, She became an instrumental factor in shaping young Gaten's career.

The Stranger Things actor earned quite a name for himself in the entertainment industry, which helped him make a fair share of the money as well.

Earning around $250 thousand per episode of Netflix's show, Gaten has managed to accumulate a net worth of $4 million at such a young age. With season three released on 4 July 2019, the show's popularity only grew higher.

And, with the buzz of next season in the pipeline, Gaten's net worth could increase vastly.