By LRU Writer | On: February 09, 2020
George Kittle exchanged his wedding vows with his wife...Their wedding ceremony was held on the main floor of...Interestingly, the athlete got engaged to his girlfriend by organizing a fake...George is married to his high school girlfriend...the height of 6 feet 4 inches (1.9 meters)...the title of her website takes inspiration from her...at the age of... 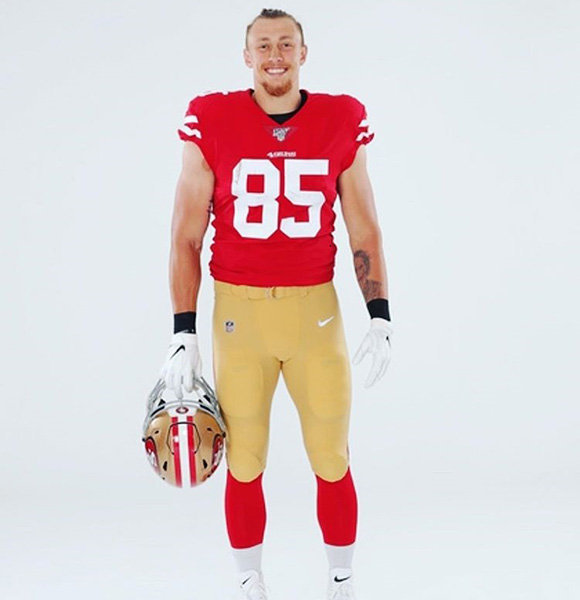 NFL footballer George Kittle first entered the realm of professional football after San Francisco 49ers selected him 2017 NFL Draft. A year later, he made his first career pro bowl and even set the record in NFL for most receiving yards in 2018.

As a result, he was recognized with the NFL's All-Pro second team title due to his breakout season. Moreover, in 2020, he helped his team reach Super Bowl LIV.

George is married to his high school girlfriend, Claire Colette Kittle. He first met her in 2012 as a freshman at Iowa. He proposed to her in 2019 after dating for a while.

Interestingly, the athlete got engaged to his girlfriend by organizing a fake photoshoot of his team, San Francisco 49ers, players. During an interview with 95.7 The Game on in 2019, he revealed,

I convinced [Claire] that the 49ers were doing a photoshoot for girlfriends and boyfriends, husbands and wives that they were going to put in the brochures and on the website. So I had our head photographer and two of our head video guys basically do a fake photoshoot down on the Santa Cruz beach, and so she basically had no idea.We were doing a whole photoshoot on the beach; cameras, we had a drone down there, lighting, everything that you possibly need. Got her a little bit distracted and then cut to the pop the question. It was pretty awesome. Their wedding ceremony was held on the main floor of M.C Ginsebergs jewelry store in Iowa.

More On His Wife

George's wife, Claire, is a blogger who is active through the site, LetteySetGo.com. The title of her website takes inspiration from her middle name- Colette- and the platform is filled with her travel journals and personal ones. The bio on her site reads,

I started this blog simply to share my story, to let people know who Claire is. However, It has evolved over the last two years into something a little more than that. You’ll find travel inspo, where to go, when to go, and how to do it right. Fashion and beauty creativity. As well as anything and everything I am currently experiencing in my life. I’ll share it all. I’m an open book.

Her online platform is an e-commerce site as well, and items such as rings and apparel, including t-shirt, are sold as well.

Facts On George Kittle Including Age: