George Lamb Dating His Girlfriend But In Secret; Reveals Secret With Father Larry Lamb Who Is More Like A Friend

Finding love is very exciting, and the journey of stumbling upon someone and seeking a possibility of togetherness is interesting as well. In the process of exploring, the opportunity to together a person often hesitates to acknowledge the other person with a relation.

Similarly, Television presenter famous for his gray hair, George Lamb created headlines when he was spotted with his girlfriend secretly. But he never spoke on turning the affair into the beautiful married life.

While he is trying escape from getting married, his father Larry Lamb who is more like his friend, turned his way to dating life with the beautiful French brunette.

Good looking and witty, George Lamb was reportedly spotted dating a mystery lady on the street of London outside the Soho Club, at the night of June 22, 2016.

George was dressed for the occasion in casual and wore a baggy sweater with a pair of khaki trousers, and his lady complimented him in a black floral print dress along with a brown leather jacket and black boots and a sling bag.

See Also:- All About Jack Maynard: His Age, Birthday, Dating Affair with Girlfriend, Net Worth and Much More George Lamb with his mystery girlfriend strolling on the streets of London on June 22, 2016 (Photo: dailymail.co.uk) George Lamb is indulging in a passionate kiss with his mystery girlfriend (Photo: dailymail.co.uk)

George was captured with a mystery girl involving in PDA which might enough to subside gay speculation with a partner, but he has not been married previously to have a wife. Previously, George dated model Edie Campbell in 2011 and actress Karima Adebibe in 2015.

Well, after his dating life with the beautiful celebrity brunette, as of 2018, he is leading the peaceful single life.

George, who gushes that his father is more like his friends, shows the example of his close relationship with his father, Larry Lamb in their 2017's show, Britain By Bike With Larry & George Lamb.

In the show, the father-son duo explores Britain's glorious national parks in their two wheels bike.

In an interview on December of 2013, George and his father, an actor Larry Lamb shared that their relationship is more of friends than a father-son. 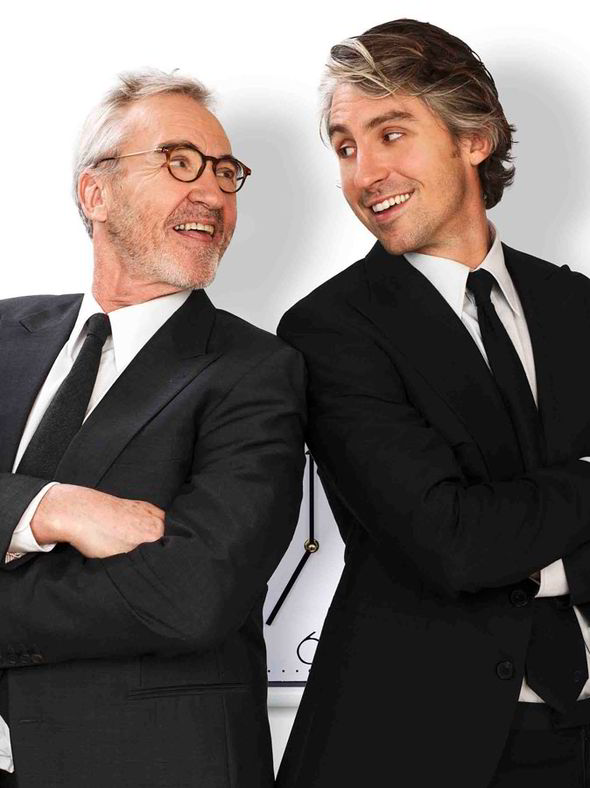 George shared his A-levels days when they used to hang out every weekend and spend time together and share things and said,

"When I was doing my A levels, every Friday I would finish at 11am and head to Dad's in London. He would cook a big fried breakfast and we'd hang out for the day.He'd tell me stories about his life, and I was old enough for him to be candid. At the end of the day we would watch South Park and Dad would laugh so hard that I couldn't hear the TV. He'd ask me: "What are they saying? What are they saying?" I'd be like: "I dunno, Dad – I can't hear anything."

Further, George expressed that his father has been a role model of his life and said,

"He has been an impressive role model for me. He came from a rough background and left Britain when he was 19 to travel and work – he didn't return until his 30s. He now speaks four or five languages and has seen a lot of the world; he has a real lust for life. He's good at taking on a room, but he's been like that since I was little. Watching him gave me the confidence to do it myself."

Further, George shared that although his father was an actor his father had all the time in the world and said,

"My dad's an actor, so he's had big periods of being skint. But when I needed anything, he'd give me half of what he had. Love, time, finance – whatever it is, he shares."

Moreover, George shared that they spend more time than the most father-son duo and said,

"We spend more time together than most father and sons, especially in the past few years because of work. When I was presenting Big Brother's Little Brother and he was doing Gavin & Stacey and EastEnders we were forever at dinners and awards together, and when I started working in showbusiness it was super-helpful having someone who'd been through it."

Furthermore, George revealed that though his father is helpful with show business for the relationship, he seeks his mother’s advice and said,

"He's not your man for relationship advice, though – he's been married three or four times. I tend to go to Mum for that."

George’s dad Larry Lamb also shared that they are more friends and said,

"Fortunately for him, Mum is more the authoritarian, so we've always had a matey relationship."

Further, George father, Larry shared that they had a trip to the Himalayan foothills of the Annapurna mountain range of Nepa and said,

"George and I try to take a trip every year: this summer we drove through Spain, and for my 60th he took us walking in the Himalayan foothills. That same year his mum turned 60 and he took her on her dream trip around Italy."

While George has not found the glowing love to turn the affair into the married life, his popular father found the young-love at the age of 70. After explicitly splitting from the partner of 20 years Clare Burt in 2016, he started dating French artist Marie Hugo since after entering into the I'm A Celebrity in November 2016.

Few people get a friend in a father, and Goerge Lamb is a lucky guy and also he had made efforts to maintain their relationship as friends.