By LRU Writer | On: October 02, 2019
Georgia Steel's boyfriend found out that she had been cheating on him with...engaged to her partner just a month after dating one...almost grew up without a father figure in her life... didn't make it to the final in reality TV shows like... 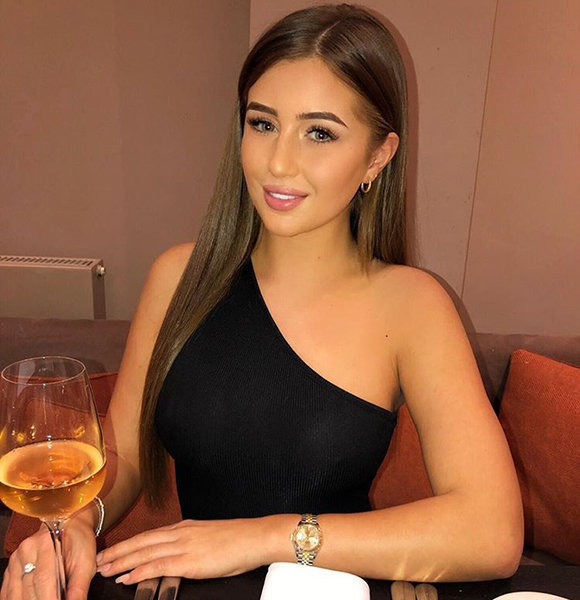 Relationships are usually messy, especially when there are a lot of controversies involved. But, no matter how hard finding a perfect partner is, it seems that in the end, things work out, be it a romance or showmance.

Reality star Georgia Steel found herself in the same position as well. She also went through a couple of heart-breaks before making her right match.

The actress's journey towards love started along with the start of her showbiz career. Georgia got into her first relationship when she turned 15 years old. At that age, she had made her debut on TV by starring in All at Sea. But, she ended her adulthood affair after reaching the age of 18.

However, the TV personality's most talked-about relationship that went on to create a significant buzz was with her Love Island co-star, Sam Bird. Their love for one another bloomed, and their showmance was apparent throughout the show's third season.

Even when the season ended, the couple didn't limit their love onscreen and also moved in together. Everything was going normal until she and Sam broke the news of their split on 17th October 2019 through their respective social media handles.

Interestingly, while fans were shocked at their split, her ex-boyfriend Sam came forward with the reason behind their break up after a few days. It turned out that the TV icon's boyfriend found out that she had been cheating on him with her then ex-boyfriend. The infidelity resulted in his decision to separate ways from Georgia.

He had got hold of the pictures of Georgia lying in bed with her ex while also coming across messages featuring sexual contents. The event sure tainted her reputation among her fans. Even though her spokesperson came to the reality star's defense, the truth was unshakeable.

Furthermore, she continued dating several other men, including few from the show, Celebs On The Ranch.

After dating with D&G model Addis Miller for a few months, on Septemeber 2019, reports started pouring in about Georgia's newfound love. Her new lover turned out to be none other than another reality star named Callum Izzard. The two first met each other in August 2019 and were also featured in the show, Ex On The Peak - which is still under production.

Moreover, the pair were spotted in Champneys Spa, leaving hand in hand kissing one another. On top of that, their relationship developed at a breakneck pace as Georgia got engaged to her partner after just a month of dating. Callum proposed her at the set of Ex On The Peak on the last day of the shoot. So, it's evident that fans will be able to see the auspicious moment onscreen next year when the show premieres.

The 21-year-old reality star celebrates her birthday on 28th March; whereas, her birth year is 1998. Born in Australia, Georgia of height 5 feet & 9 inches (1.7 m) almost grew up without a father figure in her life. Her father Rodney Lappin - a famous professional Jockey - abandoned the family while she was only three years old.

Although she grew up under the love and care of a new father, the absence of her biological father had a longterm effect on her. Georgia developed loyalty issues and even backed away from reconciling with her father when he tried to get in touch with her.

On the economic side of things, the actress's spokesperson hasn't yet come forward with her verified net worth. However, looking at the list of projects to her credit, she seems to be doing very well financially.

After all, a reality star earns about $35000 per season, and the paycheck is increased if the contestant makes it to the final. Even though she didn't make it to the final in reality TV shows like Love Island, she did procure an impressive salary from it.

But, she also suffered a significant loss in her bank account at the start of 2019. Her ex-boyfriend Medi Abalimba swindled thousands of pounds from the bank while they were dating in April that year. Thankfully, Medi is behind bars now after he was arrested on Septemeber 2019.