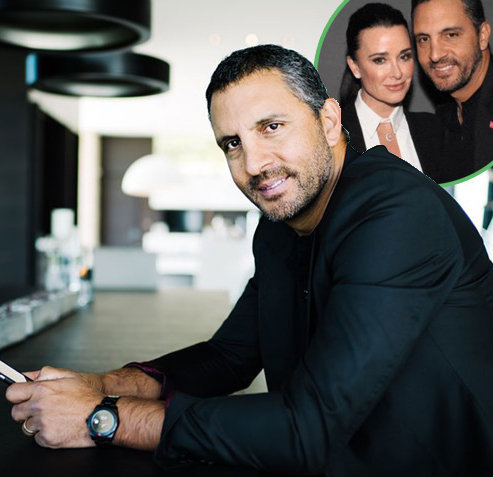 Marriage is a union of not just two bodies but also of two souls. The phrase "I do" is a confirmation of a promise to always stand by the partner in both happy and rough times.

Real Housewives of Beverly Hills star, Mauricio Umansky has been fortunate in his marriage. His marriage was in turmoils when cheating allegations surfaced against him. But not only his wife remained by his side in the distressing times; she also supported him when he was battling the claims.

Property tycoon Mauricio is a blessed man with good looks and charming personality. He can make his female fans swoon. What's more, the hunk with a well-built body and towering height did earn the label in the past as one with a wandering eye.

You May Also Like:- Justine Musk After Divorce From Multi-Billionaire Husband, Where Is She Now?

The real state mogul, who has a net worth of $40 million, was caught up in a scandal in 2013 when Star magazine reported him to be chatting with a mysterious beauty at LA Fashion Week's opening gala on 16th March 2013. Mauricio Umansky cozies up with wife Kyle Richards during an event in 2018 (Photo: allthingsrh.com)

The magazine reported that he was cozying up with a mysterious beauty, exchanging numbers with her. He was seen making most of his time in the absence of his actress turned wife, Kyle Richards. He was further alleged to have paid for the drinks with his Black Amex Credit card.

However, the reality star, who had been married to his wife for 17 years in 2013, later dismissed the allegations surrounding him.

Speaking about the rumors about his infidelity to Wetpaint, he clarified he had no Black Amex card and labeled the stories fabricated and false. Wetpaint quoted Mauricio's defense,

"First of all, I don't have a black AmEx. It's sad! It saddens me that there are people out there that want to cause pain, and that want to create stories. That's really all I can say about that thing. It's not true.

I have a great family. I have a wonderful wife and I've done my best over the past 17 years to keep a straight-up life, so I guess it's just part of the game."

After dismissing the rumors, a month later, the reality star of Mexican descent was alleged of cheating Kyle with a female, and transgender escorts.

Star magazine, a month from publishing their exclusive report about Mauricio's alleged affairs, interviewed a transgender escort known as Mistress Terri, who was promoting her autobiography I Rise. She reportedly ran sex business with her female partner Mistress Carmen.

Discover:- Does Sonoya Mizuno Have Husband? Age, Parents, To Height, Net Worth

Mistress Terri said during the interview that they had several high profile clients from 2003 to 2005 and Mauricio was one of them.

On the other hand, Mauricio categorically denied the allegations against him, and his wife Kyle stood by his side.

The property mogul got married to Kyle in 1996. They are a happy family of five with three daughters, Alexia, Sophia, and Portia. The couple's marriage was on the rocks in 2013 after the Star magazine's scoop reported that Mauricio's had cheated Kyle behind her back.

Then, Kyle not only vehemently stood by his side but also stated on Twitter that it was her who had asked her husband to get the phone number of a designer from the beauty at the LA Fashion Week event. She even stated that media should stop spreading lies and everyone would have their karma on time.

Previously in 2012, speaking on Good Morning America, Kyle had told that cheating on spouse once was okay until and unless the deeds didn't repeat for the second time.

Not only is Kyle a faithful wife to Mauricio but also an exemplary mother to their four daughters. Admittedly, she advises their children to be comfortable in their skin and never pay mind to the trolling that may arise because of their body.

In March 2019 episode of Real Housewives of Beverly Hills, the mother of four credited Jennifer Lopez and the Kardashian Klan for helping her and her daughters maintain positive body image issues.

Kyle has supported her husband on numerous occasions as a mature wife and always been by his side, which has been one of the reasons for their marriage's longevity.

The couple celebrated their 23rd marriage anniversary on 21st January 2019. They still look to have the same bond they shared when the wed in 1996.

Through the cheating allegation, Mauricio came out a changed man. With assistance from his wife Kyle, the shrewd businessman was able to right his wrong. Today, he is a family man and very courteous of women's emotions.

Nothing exemplified his improved behavior when he took his wife, daughter and his daughter's friend to Coachella Valley Music Festival in 2019. And for the International Women's Day though, he penned a heartfelt Instagram post, thanking the five amazing women - wife & four daughters - in his life.

Likewise, the pair celebrated the 7-year-anniversary of the opening of Mauricio's real estate firm, The Agency in 2018. Kyle even put up a post marking the milestone on her Instagram.

But not everything was all unicorns and rainbows in the real estate agent's life. The celebration came amidst the on-going lawsuit battle filed against Mauricio and his real estate firm by his very own insurance company, Western World.

The lawsuit accused Mauricio of failing to inform the seller of all offers including the offer to the buyer by the third party. In a countersuit filed by Mauricio, he has sought to dismiss the initial charges filed against him.

However, the then-ensuing legal battle did very little to deter the romance between him and his wife, Kyle. On 18th September 2018, the couple got spotted at the Emmy's after party. About a week earlier, Kyle had uploaded the snap of them working out on Instagram, whose caption read:

""The couple that works out together ..." You know the rest!"

From fending off alleged cheating/affairs to celebrating milestones together, Mauricio and his wife sure have come a long way.

Before his case with his former insurance case settled, Mauricio got hit with the $32 million lawsuits over the 2016 sale of a 15,000-square-foot Malibu mansion.

Sweetwater Malibu LLC, owned by the Vice President of Equatorial Guinea Teodoro Nguema Obiang Mangue, accused the father of four of earning secret profit from the reselling of the stated house.

Per the plaintiff claims, the "case involves brazen breaches of fiduciary duties."

Also Accused Of Fraud:- Scottish Artist Peter Doig in Bizarre Lawsuit: Said "Nice Painting, But Not By Me"

In response, Mauricio dismissed the allegations explaining that the lawsuit was an open "attempt to take back the proceeds he forfeited to the United States.”