By LRU Writer | On: February 11, 2020
Giannis Antetokounmpo is a Greek basketball player playing for the Milwaukee Bucks...drafted into the NBA in 2013...is dating his girlfriend Mariah Riddlesprigger from 2017...gave birth to their son on...his parents are Veronica and Charles...has four brothers, three of them play basketball and one plays professional football...has a net worth of around $43.2 million...his height, age, and measurements are given below... 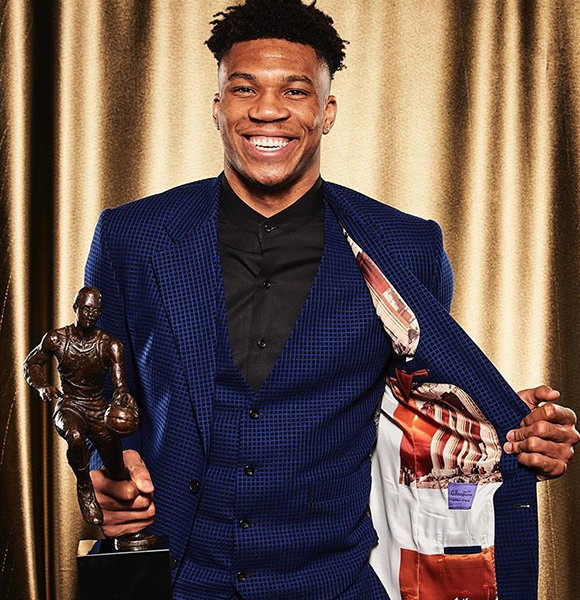 Giannis Antetokounmpo is a basketball player for the Milwaukee Bucks of the NBA. He has been with them since 2013.

He was drafted 15th pick of the 1st round for the Bucks during the 2013 NBA Draft. Since then, he has played in 465 games for his team, starting 400 of them. In addition to this, he also has three All-Star team appearances.

Giannis has also appeared for the Greek National basketball team in various tournaments, such as the 2014 and 2019 World Cup and 2016 Olympic Qualifiers, making 22 appearances in total.

Giannis is in a relationship with Mariah Riddlesprigger. The couple has been together for almost three years, having started going out in 2017. After two years of dating, the couple announced that they were expecting a kid. On the 11th of October 2019, Marian took to her Instagram to announce that she was pregnant with her first child.

And, on the 11th of February 2020, Giannis took to his Twitter to announce the birth of his son, Liam Charles Antetokounmpo.

Giannis’ parents are Veronica Antetokounmpo and Charles Antetokounmpo. Veronica was a high-jumper back in her youth, and Charles was a Nigerian soccer player. They moved to Greece in 1991, three years before Giannis was born.

Giannis lost his father to a suspected heart attack on the 29th of September 2017. He was in a Greek hospital for ten days before he passed away.

Giannis isn’t the only child of his parents; he has four brothers. His older brothers are Francis and Thanasis Antetokounmpo. Francis plays professional soccer, whereas Thanasis plays alongside Giannis with the Milwaukee Bucks.

Similarly, his younger brothers are Kostas and Alexis Antetokounmpo. Both of them play basketball; Kostas plays for the Los Angeles Lakers, whereas Alexis plays college basketball. Giannis Antetokounmpo with his mother and brothers in August 2018 (Photo: Veronica Antetokounmpo’s Instagram)

The family now lives in the United States.

Giannis owns an estimated net worth of $43.2 million.

He earns around $19 million in endorsements. Nike extended his contract, increasing his annual pay from $20K to $9 million. This amount increased with the release of his first signature sneakers in 2019.

In addition to his deal with Nike, Giannis has also appeared in commercials for brands such as Aegean Airlines, Milki, JBL, Tissot, and more.