By LRU Writer | On: August 26, 2019
Greg Vaughan has ridden the stairs to success through his career...the star was married to wife...for both, but it was a mutual conclusion at the end... the couple shared moments of their blooming romance on...actor has amassed a fortune worth... 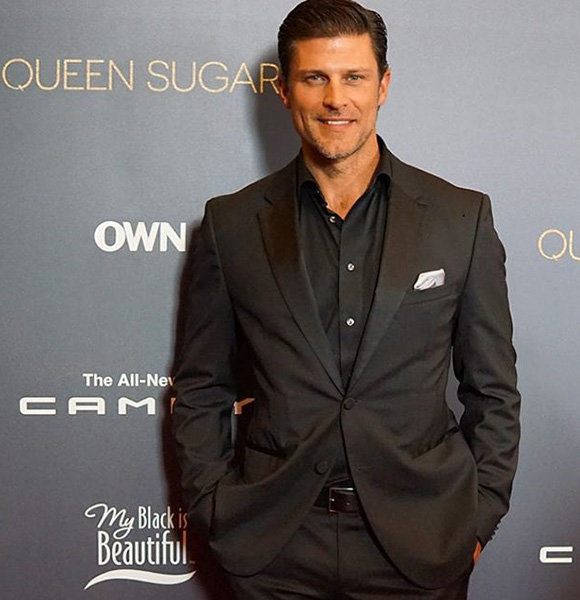 Popular actor & model Greg Vaughan has ridden the stairs to success through his career from soap operas, TV shows and modeling alike.

He gained much recognition as a model from an early age. During high school, the Texas native bagged an opportunity to work in Milan, where he worked for two months for the fashion brand, Armani.

After dwelling into the modeling industry for a bit, he went on to pursue a profession in acting. Starring as Lucky Spencer on General Hospital and with hits like The Young and the Restless and Days of Our Lives, Greg has earned stardom in the entertainment industry.

Previously, the star was married to actress wife, Touriya Haoud. Greg and Touriya held a Christian wedding ceremony officiated by Rev.Max Morris and tied the knot on 4 June 2006. During their time together, the couple welcomed three sons: 4 May 2007-born Jathan James, nine-year-old Cavan Thomas, and Landan Reid -  age 7.

After a joyful married life for over nine years, Greg and wife Touriya eventually split in 2014. The actor reported the split via an Instagram update,

"As we open our hearts full of love & sadness, 9 years together & 3 beautiful children, we have decided to amicably separate. With dear love for each other and our family, as parents first and foremost, we kindly ask our space and privacy to be respected at this difficult time. With our sincere love, Greg & Touriya."

His ex-wife did the same and posted the same photo message on her social media handle. It seems the seperation was a saddening experience for both, but it was a mutual conclusion at the end.

Greg remained out of the dating scene for a while post his divorce from the mother of his children. While some gay rumors did bother the actor around that time, he didn't feel it worth his time to justify.

Four years after the split from his ex-wife, Greg eventually went on to date the beautiful actress Angie Harmon in December 2017. The pair had grown up together and had remained friends for the most of it.

The actor and his girlfriend both went public with their relationship when the couple shared moments of their blooming romance on social media. Even after over a year and a half into their relationship, Angie still gushes over the love and support she receives from her boyfriend. 46-year-old Greg is also not shy and often boasts similar feeling towards her.

Born on 15 June 1973, Greg Vaughan is a native of Dallas Texas. His full name is James Gregory Vaughan Jr., given to him by his father James Vaughan and mother, Barbara Vaughan.

The model-actor derives a mixed ethnicity from his parents, which consists of part greek, English, German, Scottish/ Northern Irish. Greg also has a brother in his family, who remains unnamed to date.

For the list of TV shows, Greg - height 6 feet (1.83 m) -  has had some serious success even though his acting credits are limited to 14 shows.

With his roles in popular shows and movies like Poison Ivy, Malibu Shores, Playdate, Legacy, Charmed, Sabrina the Teenage Witch, Macgyver, General Hospital, the actor has amassed a fortune worth $4 million throughout his career.

As of 2019, Greg returned to the set of OWN’s Queen Sugar to portray the role of Calvin and continues his character of Eric Brady on the NBC Soap Opera, Days of Our Lives.