By LRU Writer | On: April 20, 2021
Hannah Barron has always been a regular southern girl who loves...At the age of four, she knew how to...are engaged to get married... 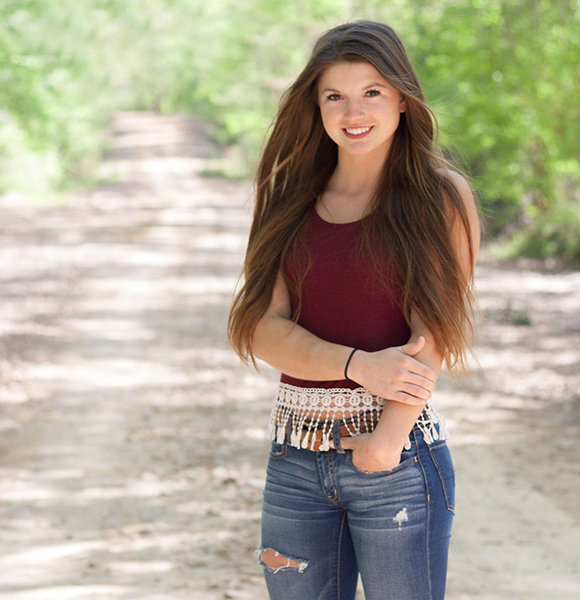 Hannah Barron has always been a regular southern girl who loves the outdoors. At the age of four, she knew how to distinguish snakes.

As an eight-year-old, she killed her first deer. However, in 2016, Hannah’s life took a surprising turn. Please stick with us to know what the event was a turning point in her life.

The Viral Girl`s Rise To Fame!

It so happened that her new neighbor got her into noodling- catching catfish with bare hands. One day her cousin filmed her noodling video, which Hanah uploaded on her Facebook and Instagram. And the video went viral, racking up 25 million views in the first week.

The video catapulted Hannah into an online star. Now, she boasts more than half a million Instagram followers and over 300K YouTube subscribers. She frequently uploads her video of outdoor actions which include, fishing, camping, and lifestyle vlogs.

Born in 1996, Hannah celebrates her birthday every year on 3rd July.

The American national possesses a Cancer sign according to her date of birth. The Alabama native is exceptionally close to her father, Jeff, and mother. As an only child, she is the apple of their eyes.

Born in 1996, Hannah celebrates her birthday every year on 3rd July. She currently ages 24 years old.

The American national possesses a Cancer sign according to her date of birth. The Alabama native is exceptionally close to her father, Jeff, and mother. As an only child, she is the apple of their eyes.

Hanah’s love for the outdoors and hunting comes from her father, an avid animal hunter himself. The father-daughter duo bond by hunting animals and outdoor adventure. On 16th June, the Instagram star posted a picture with her father catching two catfishes.

Similarly, Hannah occasionally features her mother in her YouTube videos.

Ever since Hannah shot to internet fame in 2016, her dating life has been a matter of concern for her fans.

And it was no secret that she was dating Hunter Horton since 20th August 2016. The pair went from strength to strength despite ups and downs in their relationship.

Hunter took a plunge and proposed to her on 20th December 2018. Hanah made him the happiest when she said yes to the proposal. While everyone was looking forward to a possible wedding, the couple had a hard cheese in their relationship.

After being engaged for nearly a year, they called it quits somewhere around late 2019.

But, Hannah was not one of those who would remain down in the dumps after a broken engagement. Instead, she went on to find love for the second time.

This time, Hannah has not come upfront with her relationship. But her Instagram posts featuring Cohen Stone, a hunter, and a producer, made everyone wonder who the handsome hunk might be. And it wasn't late before her fans found out the couple has been dating.

Their passion for hunting might be the reason they came close in the first place.

The couple doesn't shy away from flaunting each other on their respective social media. For instance, the couple ex-changed birthday wishes on Hannah's 24th birthday and Cohen's birthday in 2020.

They even went on a trip to Mexico on August.

And as the pictures suggest, it seemed like it was only the two of them on the beach.

And as the pictures suggest, it seemed like it was only the two of them on the beach.

Her Net Worth, Education & Measurements

From her self-titled YouTube channel, Hannah makes an average income between $455 - -$7.3K per month, and she has an estimated yearly earning of $5.5K - $87.5K. As a co-host of an outdoors program on the Luverne-based Hunt Channel, she earns an annual salary of $57,937.

This sums up that Hannah has an estimated net worth of thousands of dollars. But that's not where she is stopping. With a budding career like hers, she will definitely add to her growing net worth.

Taking about Hannah’s education, she went to Lurleen B. Wallace Community College.

After the college experience, she went to Troy University. The online star - height 5 feet( 1.52 m) and weight 52 kg - completed her university education with flying colors in 2019.