By LRU Writer | On: January 14, 2020
Hayley Roberts is an actress who married David Hasselhoff...they have an age gap of 28 years...She married her husband on...The wedding was attended by David's daughters from the previous relation with...Hayley is a native of...and is mostly known for Russell Coight's All Aussie Adventures (2001)... 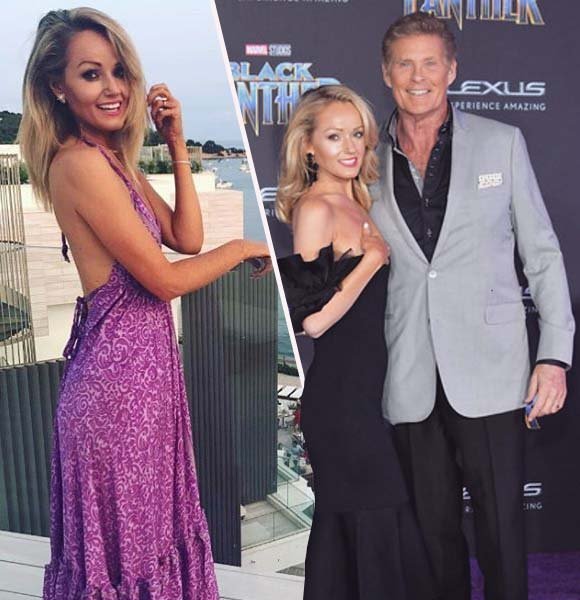 Hayley Roberts is an actress and model known for her appearance in the Australian comedy TV series- Russell Coight's All Aussie Adventures (2001). Along with her acting and modeling career, the actress became the center of attention for the paparazzi when she married Baywatch actor David Hasselhoff.

Initially, she used to work as a sales assistant in a Debenhams store before trying her luck in Hollywood.

Hayley first met David when he was a judge on Britain's Got Talent in 2011. She asked the actor for his autograph, and David was quick to respond by asking for her phone number in exchange.

Eventually, the couple fell in love, and despite having a solid age gap of 28 years, the two got engaged in May 2016 at a picnic in Malibu.

After two years of their engagement, Hayley and David got hitched on 31 July 2018. Hayley and David got married in a private ceremony in Puglia, Italy.

Hayley's husband, David, is a Hollywood actor who is best known for films like Knight Rider (1982) and Baywatch (1989). He has a net worth of around $10 million, according to Celebrity Net Worth.

David was born on 17 July 1952 in Baltimore, Maryland. His parents are Dolores Therese (Mullinex) and Joe Hasselhoff (Joseph Vincent Hasselhoff).

Also, the actor is of German, English, and Irish descent.

Also, he was married to Pamela Bach-Hasselhoff from 8 December 1989 to 27 July 2006, and the pair had two daughters named: Taylor and Hayley.

Another Actress With Same First Name:-Hayley Atwell On Settling Down With Boyfriend! Real Talks About Dating