Hayley Atwell On Settling Down With Boyfriend! Real Talks About Dating

By LRU Writer | On: May 16, 2019
Hayley Atwell On Settling Down With Boyfriend! Real Talks About Dating. Sometimes our potential life partner is around, but we just take time to see the person in a different light just to finally realize that the one, we were searching for a long time was a familiar person.A similar case came across with British and American actress Hayley Atwell. 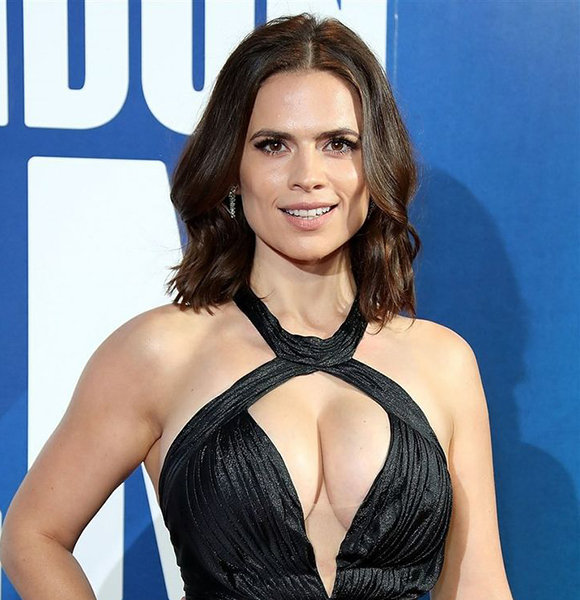 Sometimes one's potential life partner is around, but one takes time to see the person in a different light to finally realize that his/her soulmate that he/she were searching for a long time was a familiar person.

A similar case came across with American-British actress Hayley Atwell. So, let’s read further to know more regarding her love life.

Hayley eventually stumbled upon "the one" with whom she wants to settle down and have children. She kept the identity of her boyfriend a secret till now, but she shared that he was a medical doctor by profession in an interview with The Times back in November 2017.

“He’s a doctor. A medical doctor, so he’s not in the industry and I’ve known him since I was ten.”

Despite being acquainted with her boyfriend from the age of 10, the couple was re-introduced to each other by her boyfriend’s sister. The Black Mirror actress admitted that he is the one with whom she would like to share her life.

“I’ve finally met someone I want to share my life with,”

“I’m very happy, but, as Margaret says, I don’t expect any man or woman to be all my life. I think that’s such a beautiful thing to say and it’s true. You can love someone tremendously, but if you get lost in someone, it’s the end of the relationship anyway.”

Meanwhile, though she shared her desire to have a family life with her doctor boyfriend, she didn't disclose her plans for getting married. It's possible that she is thinking about her wedding or even making plans for it. Further, she could surprise everyone with an announcement, who knows!

But instead of surprising her fans with the wedding announcement, the actress - age 37 - scattered her fans' wish to know her ideal boyfriend after she told Town & Country UK's Autumn 2018 issue that her doctor boyfriend wouldn't appear with her on any red carpets before getting married.

It seems she wants to keep her boyfriend from the prying media eyes by keeping the identity a mystery. She described:

“I wouldn’t want him to be on a red carpet with me, or in any way, in the public eye unless there was a ring on my finger to respect him and respect the relationship. He’s not seen on my arm as my date.”

Further, she explained that he is not the show-biz, fame-seeker person. She shared an incident where the couple was watching the Oscars highlights, and his boyfriend claimed her job is bizarre.

“I saw him watching the Oscars highlights and he said, ‘God, your job is really weird. He doesn’t know anyone in terms of celebrity, so I can bring him to anything and he doesn’t change how he responds to anyone at all. That makes everyone feel very comfortable.”

Hayley, who once hit the theatre with the drama Measure for Measure with Jack Lowden, seems to be concerned for her career for now.

Shifting lights from her current dating life, Hayley previously dated model Evan Jones. The former couple was introduced to one another by photographer Rankin, and they stepped out together in December of 2013.

However, the relationship was short-lived. In an interview with Standard Magazine, in July 2015, Hayley revealed that she called off the romantic association of 18 months and the decision to part ways was mutual.

"We’re not together any more. It was a mutual thing. He’s younger but really mature. There was no drama. So I’m single and dating until the next two-year relationship comes along." Hayley Atwell with her ex-boyfriend Evan Jones circa 2014 (Photo: dailymail.co.uk)

Also, Captain America actress was reportedly dating Snow Patrol bassist, Paul Wilson back in 2012. Reports also claimed that she was dating Stephen Merchant, a beanpole comedian. Thus, she came forth to address the erroneous statements and clarified to Standard,

‘I don’t know why!’ We were photographed coming out of the Groucho together. The next thing I know, I’m eating cereal in my pyjamas and I get a tweet saying, “Hayley Atwell in car accident with Stephen Merchant,” so I texted him and said, “Apparently we are in a car accident together. Are we OK?” ’ Well, after going through a heartbreak many times following the failed relationship, finally, Hayley has found a person with whom she envisions having a family and kids.

Thus, her fans are overwhelmed and eagerly waiting for an announcement of their probable wedding in the days to come!

The TV actress’ fans were in for a huge disappointment when the much-loved show Agent Carter got canceled in 2016.  In just two seasons of airing the costume drama-cum-detective show, it made a place in the heart of the audience.

Hayley ‘s brilliant performance of secret agent Peggy Carter in 1940s American won the appreciation of the admirers all over the world. Thus, fans cannot help but speculate if the show will indeed come back in the Disney’s streaming platform, Disney+. The speculation got weighage when Marvel TV boss Jeph Loeb hinted that they were on-board of bringing the show again if a new network picked it up.

No matter the fate of the show, Hayley didn’t slow down as she wowed the audience in Rosmersholm play in 2019. Beside her, the play starred Lucy Briers, Tom Burke, Jake Fairbrother, Giles Terera and Peter Wight.