By LRU Writer | On: September 25, 2019
Heather Dubrow is happily married...her wedding was a dreamy affair as...are parents to four...has summoned a whopping net worth of...owns a $21 million mansion in the Tony...featured in almost every architectural news in... 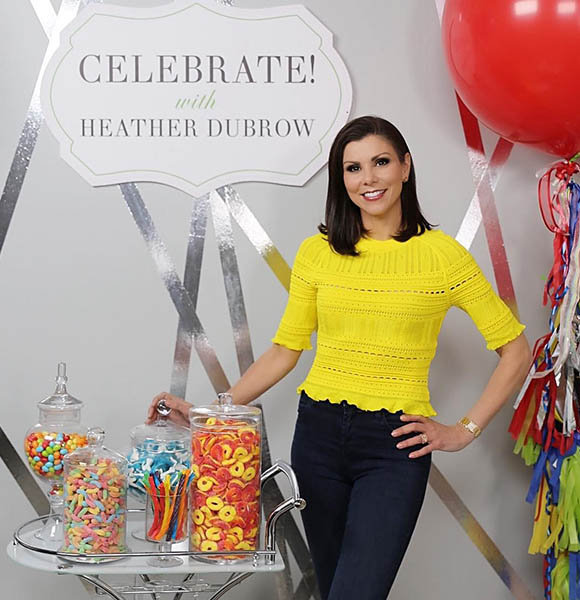 People familiar with the American reality show Real Housewives are probably aware of the show’s trend of featuring personalities with complicated love lives. But, the pattern broke when the series featured Heather Dubrow - an actress and TV personality with stable married life - in one of its installments, The Real Housewives of Orange County.

As Heather had a healthy marriage of 13 years with her husband, viewers of the show initially suspected that her character lacked the drama essence of reality television. But, eventually, she ended up becoming a fan-favorite with her fun and outspoken personality.

The television personality - aged 50 -   is a Syracuse University graduate with a BFA in Musical Theatre. During her college days, the gorgeous lady of height 5 feet 7 inches (1.7 m)  bagged titles in many beauty pageants. She won the title of Miss Greater Syracuse (N.Y.) in 1989 and was named Miss Congeniality at the 1989 Miss New York State Pageant.

After graduation, Heather got her first break in 1994 with Married with Children and acted professionally throughout the 90s.

Heather, whose life already seems like a perfect fairytale, is a happily married woman.

She first encountered her husband - a renowned plastic surgeon named Dr. Terry Dubrow - on a blind date. But, Terry was not precisely, love at first sight, for Heather.

She took a liking for Terry only after getting to know him better. She finally fell for him after she went to visit him at work, where he was all in his 'Doctor' element.

Eventually, the couple tied the knot on 5th June 1999. Their wedding was a dreamy affair, where Heather donned a beautiful white ball-gown, and Terry sported a dashing black suit. Heather and her husband have also worked on professional commitments. The couple appeared in Real Housewives in 2012, after 13 years of their marriage. In the show, they showcased the most durable bond.

The beautiful couple also became business partners in 2018, when they created The Dubrow Diet: Interval Eating to Lose Weight and Feel Ageless. In the book, Heather shares her tips for maintaining a camera-ready physique.

As of 2019, Heather and Terry have completed two decades of marital bliss and are parents to four children:  Nicholas, Maximillia, Katarina, and Collette.

The Dubrow kids' name may not strike as fancy celebrity baby names, but they are not commonly used. That's because Heather and Terry put a lot of thought on their children's name.

They wanted to name their first two kids Nicky and Max and eventually settled for Nicholas and Maximillia. As for the other two kids, Heather and Terry wanted to give them Russian names. Heather initially wanted to call one of her daughters as kitten, which later became Katarina. Lastly, Collete was named after a character from the Pixar movie, Ratatouille.

Being an established TV personality and an actress, Heather has summoned a whopping net worth of $40 million. However, her wealth does not come only from her appearance in the reality show and acting credits. She has also invested in various business endeavors.

The duo together owns a $21 million mansion at the Tony Newport Beach nabe. Their 22,000-square-foot home which they dubbed “Dubrow Chateau” was featured in almost every architectural news in 2019.