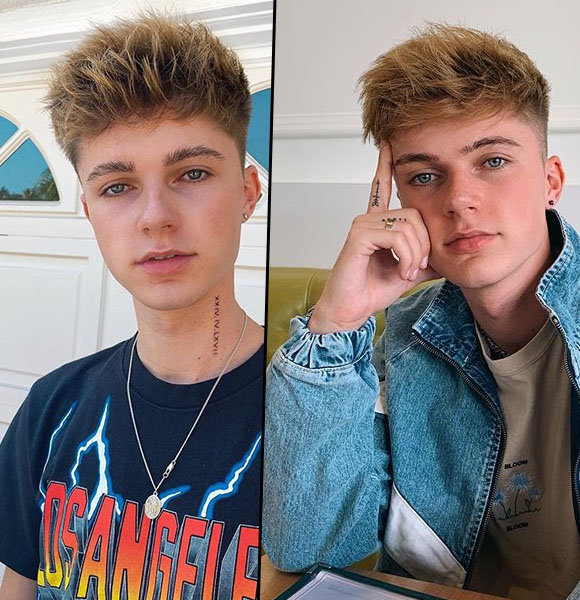 A rising R& B singer from England, HRVY rose to fame after his debut single Thank You - released in December 2013 via his YouTube channel - became a massive hit.

Born in Kent, England, on 28th January 1999, HRVY's real name is Harvey Leigh Cantwell. His parents are Leigh and Nicky Cantwell. While Leigh works in the printing business, Nicky is a counselor by profession.

HRVY was raised alongside his two brothers named Ollie Cantwell and Elliot Cantwell. Apart from his sibling bond with brothers, the young singer is a real family guy (unlike Peter Griffin from the animated sitcom Family Guy) - who loves to spend his free time with his family and friends.

HRVY is, without a doubt, a very handsome guy and has a massive number of admirers. However, his dating status is not exactly clear. Recently, he has been linked with Tiktok sensation Loren Gray.

Loren, who has over 35 million fans in Tiktok, is often seen spending time with HRVY. The two have also been friends for a long time. Further, both HRVY and Loren ofter post cozy pictures with each other on their social media, which have led the fans to believe that they are dating. However, neither HRVY nor his rumored girlfriend has confirmed the relationship yet.

Before Loren, HRVY was linked to several models, namely Daniela Rueda, Brenna D’Amico, and Paige Danielle. The one thing that all his past rumored girlfriends have in common is that they have all been featured in HRVY's music videos at one point or another.

HRVY started singing from the mere age of five. As a child, he used to perform in front of his family members at family events.

But, the artist never took music seriously since no one from his family had ties in the music industry. His career started only when a manager named Blair Dreelan discovered him after seeing his 30-second video of performing Justine Timberlake's Mirrors.

After that, HRVY started performing at various stage shows. His first big show came at the All Starz Summer Party in 2013, where he played alongside big names like JLS, Lawson, Jessie J, Amelia Lily & Union J.

Further, his career reached new heights after the release of his first single Thank You on 11th December 2013. After that, he has also appeared as a presenter of  BBC’s children’s show, Friday Download.

Apart from that, HRVY released two EPs with five songs. The first one named Holiday was released on 25 July 2017, and the latter titled Talk To Ya on 30 November 2017.

Well, with such an amazing career, it's pretty apparent that the young singer has garnered a significant wealth as his net worth. Although the exact figure remains under wraps, his estimated net worth is $500,000.